Take Home a Hot SEAL for only 99 cents 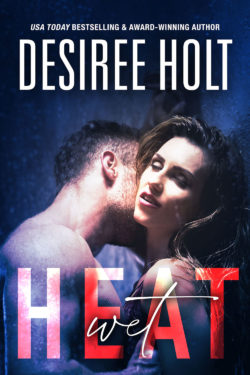 Use coupon code wsaugust and get WET HEAT for only 99 cents at booksbydesiree.com. Sale ends September 1.

It was supposed to be a month in a cottage by the lake in Maine. For Peyton Gerard it was time to recover from not one but three disastrous breakups and try to find her muse again. A successful romance novelist needed to believe in romance to write about it believably, and Peyton had lost her faith in it.

For Dixon “Dix” Amendola it was supposed to be time to rehab his injured thigh from a SEALs mission that fell apart, to mourn the two team members who were killed and to deal with his guilt. Learning the mission had been compromised did nothing to ease the burden of blame he carried.

The problem: the cottage had been rented to both of them by accident.

Put two stubborn people in close quarters—a hot SEAL and an appealing author, add in moonlit nights by the lake, and suddenly they don’t mind sharing. But then reality intrudes, Dix returns to lead a repeat of the mission and all Peyton can do is pray it will be successful and that when he returns, he’ll come back to her.