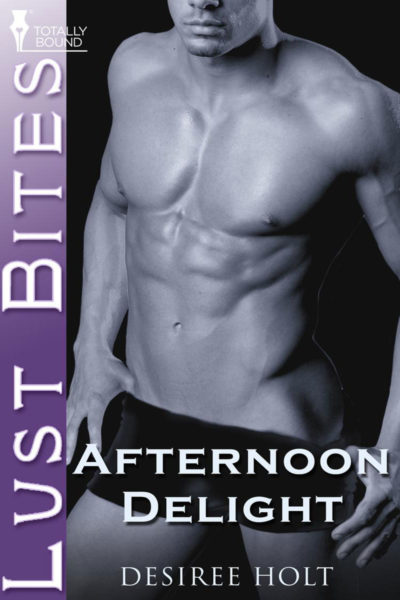 Savannah and Lori were spending the afternoon sunbathing nude on their condo patio and bemoaning the fact that their lives were at the moment devoid of men. Wondering if either of them would ever meet that special someone who seemed to be so elusive.

Both women froze. Lori nearly pitched off the lounger onto her face, and Savannah frantically tried to think if she could hide the things in her hands.

“Don’t let me stop you, ladies. In fact, maybe I could give you a hand.”

Savannah swivelled her head to see a huge hunk of masculinity jumping lightly over the low brick wall that separated their patio from the one next door. At least six four, she thought, with sun streaked blond hair, broad shoulders and lean hips, and muscles that flexed smoothly beneath tanned skin that shouted hours outdoors, not the gym tanning lamp. Then she looked up and nearly drowned in the exotic, emerald green eyes gleaming with good humour.

He leaned his hips against the wall, powerful arms folded against his broad chest. In the soft jogging shorts he wore, it was impossible not to notice the nice big tent his cock was making.

Savannah was mesmerised, unable to tear her eyes away from so much raw sex appeal.

“I, um, didn’t hear you moving around over there.” She nodded at his patio. His condo and the one she and Lori shared were the only two at that end of the building, which gave them a degree of privacy. The two patios were separated by the low brick wall their visitor now leaned against.

He grinned. “And here I thought you were putting on this show just for my benefit. Deke Rogers,” he said, introducing himself. “And please, don’t let me stop you. I’m enjoying the show.”

Lori sat back on her haunches, her eyes glazing over. Savannah could see she was just as hypnotised by the visitor. Savannah had to restrain the urge to leap up and run her tongue over every inch of his body. When she could make her mouth work properly, she said, “I’m Savannah Rogers. This is my friend, Lori Avondale. We own this condo together.”

“Do you, um, do this often?” He gestured at them with his hand.

Savannah smiled at him. “Only to keep from getting bored—when we don’t have a walking sex god around to help us.”

“Sex god, huh?” He laughed, a warm, honeyed sound. “I figured you hadn’t just decided to try this for the first time. You look like you’re having too much fun.”

“We thought you didn’t even notice us,” Lori told him, fluttering her eyelashes in an exaggerated move.

“Oh, I noticed all right. I’ve noticed a great deal. So, is this an exclusive game or can anyone play?”

“I hope I fit your selection list because I got tired of waiting for my invitation and decided to crash the party.” He reached over the wall and lifted up a wine cooler with three bottles chilling in it. “My contribution, in case you asked me to play.”

Lori turned her head, and she and Savannah exchanged a wicked look. They both nodded imperceptibly.