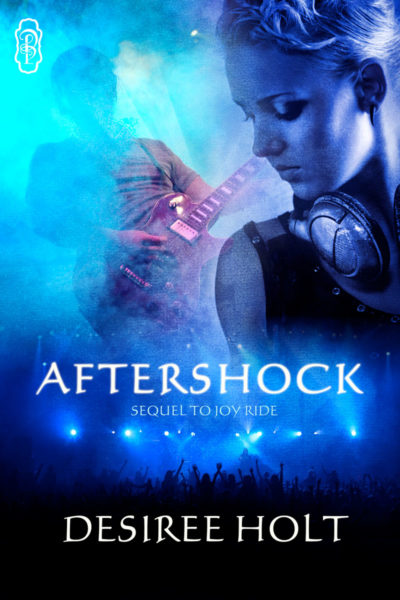 Determined to shake off her past, Sydney Alexander plans to seize the day when it comes to handling PR for Lightnin’ the blazing star rising on the rock scene. Rick Trajean, Lightnin’s lead, torches her all business all the time mantra when the sizzling chemistry between them ignites brighter than the band’s popularity.

As Lightnin’ scorches the charts, Rick and Sydney burn up the sheets. But can their passion handle the pressure of the music business? Not everyone is happy with Lightnin’s success and when the vindictiveness so common in the business threatens to destroy the band, their tour, and the love Rick and Sydney found in each other, their powerhouse may come crashing down. What’s left when it does?

She was still buzzed from the evening when she checked into the hotel. Lightnin’ happened to be at registration at the same time and their excitement was palpable. Even Danny and Garrett came over and gave her a hug. They all rode up in the elevator together, the guys still high on excitement, laughing and bumping fists. Except for Rick, who was strangely silent.

They got off at the same floor she did and she discovered they were in the same section of the hallway. She was shocked to discover Rick’s was right next to hers. She slid a glance at him, stunned to see him watching her, a ravenous look in his eyes. She couldn’t mistake the desire in his gaze. Did he want her to join him? Should she ask him if he wanted to come into her room? What was the protocol here?

Unsettled, she fumbled with the key card and dropped it in her nervous haste to get inside. She wasn’t aware he had moved until he was beside her, taking the card from her fingers. He slid it into the slot and, when the lock light turned green he pushed the door open.

“Here you go.” He held the door back with his body and waited for her to enter.

She moved past him, rolling her suitcase in and turned to him. Before she had time to say a word he grabbed her arms, turned her to face him and pressed her against the door.

“I’ve been wanting to do this all day.” His voice was heavy with a combination of emotion and desire. “I think tonight calls for a celebration, don’t you?”

Speech deserted her and all she could do was nod. She wanted him, this man who had exploded into her life. More than she wanted her next breath. She was hungry for him with a passion that never seemed to leave her. Sydney cupped the roughness of his late night beard with her hands, loving the scratchy feel of it.

She tilted her face up just the least little bit to accommodate him as his mouth came down on hers. The minute their lips met, heat surged through her, as if someone had lit a match to her blood. She clutched at his shoulders to steady herself, knowing she should break away even as her body cried for more. She was drowning in him, his heat and scent invading her. And all she could think was more, more, more.