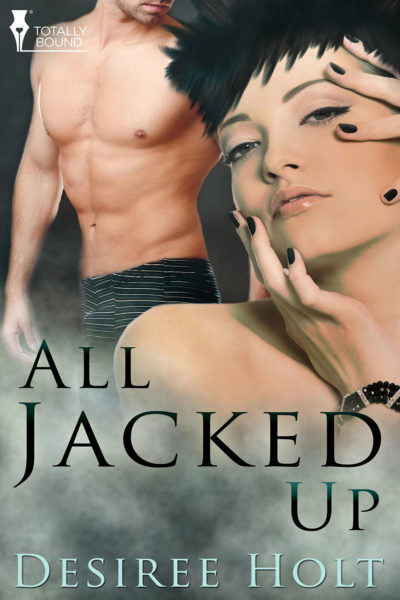 On his fortieth birthday Jack Manning had his own private pity party until a pixie showed up and he was soon “all jacked up”.

Jack Manning had carried an image with him all of his adult life of the woman he planned to marry. She’d be every man’s ideal—slender with masses of blonde curls and sapphire blue eyes.

Darcy O’Connor has been the odd-girl-out all her life. Barely five feet tall, she wears outrageous clothes, styles her short black hair in spikes and has developed a smart mouth to cover her insecurities.

When she walks into Eli’s, the favoured neighbourhood hangout, and meets Jack on his birthday, it’s like a collision of the planets. Instantly they rub each other the wrong way. But very hot sex keeps drawing them together.

Will they burn each other out before they realise what their feelings really are?

Jack Manning leaned against the bar, sipping his drink and indulging in his own private pity party. Friday night and all around him in Eli’s, their favourite bar, his friends were celebrating his fortieth birthday. A death knell that had crept up on his rapidly dissipating youth. Not that he didn’t appreciate the cheer and good wishes—it just sucked that everyone was coupled-up except him.

“Still looking for the perfect woman?”

A hand clapped his shoulder and he turned to see his closest friend, Mike Moreland, grinning at him. Jack just shrugged and took another slug of bourbon.

“She won’t find you if you stand there glaring at everyone,” a musical voice said.

Carly, Mike’s wife. Great. They were double-teaming him.

“It’s my birthday,” he told them with an edge to his voice. “I can glare if I want to.”

Carly stood on tiptoe and whispered in his ear, “Loosen up a little, will you? Lose the jacket and tie. Forty could be just the beginning for you.”

Jack did his best to stretch his mouth into a smile, but the effort was obviously so bad Carly burst out laughing.

“Okay, okay. I think the glare suits you better.”

One by one his friends settled up their tabs, wished him a happy birthday and drifted out, off to their homes or whatever couple of activities might be on their calendars.

How the fuck did everyone else find the right person and I’m still going home to Mr Big?

Mr Big was a cat of indeterminate heritage who had adopted him a couple of years ago and seemed to be the only housemate in his future. He wasn’t a bad catch. His friends told him that all the time. He owned a one-man financial services business that did well. A house that was small but well-furnished in a good neighbourhood. Had no really bad habits to speak of. Considered himself fairly intelligent. He worked out regularly and kept himself in good shape. He might’ve liked to have been a couple of inches taller but it wasn’t a game changer.

So where was the woman for him? At forty, surely he should have found her. Instead he was a single man in the coupled-up crowd of his friends. With no change in that status in the foreseeable future. When people asked him why he wasn’t married yet he wished he had some other answer to give them other than he hadn’t yet met the right woman.

But that was a big part of it. His friends told him he was too picky. Had expectations that were too high. That there were plenty of women right under his nose who were perfectly acceptable.

Trouble was, he didn’t want an ‘acceptable’ woman. He wanted one who would make his friends look at him with envy. One who would validate him as a babe magnet, something he’d never been able to lay claim to.