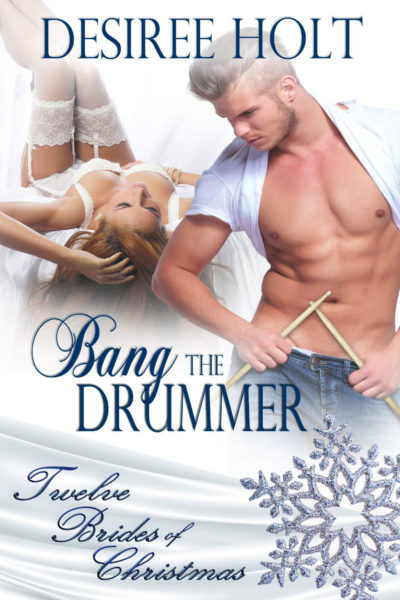 Jill Kennedy has plans for a Christmas wedding. She’s put down deposits for the flowers, photos, and venue. Now all she needs is a groom. A drummer who’ll keep her life as steady as he keeps the beat to his music. With her good friend Charlie Costello as her wingman, she’ll interview percussionists, one per month until she finds the right tempo. But with Christmas approaching and no groom in sight, she’s starting to wonder if she’ll ever bang the drummer of her dreams.

“I think I’ve got everything taken care of. Booked the Creekside Winery. Ordered the decorations. Set up a tasting for the food and Stella’s designing the wedding cake.” She glanced up at Charlie. “Why are you looking at me in that strange way?”

He gave her his familiar lop-sided grin. “You are the only woman I know who plans and pays for her wedding without knowing who the groom is.”

He threw back his head and laughed. “Yeah, I love your interview process. You aren’t even dating anyone right now.”

“Because look how poor my choices were in that arena, right?”

He snorted. “So this is better? Tell me how?”

Jill pulled up another memo on her iPad. “Okay. I have a list.”

If she didn’t need his help so badly, she would have smacked him. “It’s very specific. I asked around about different drummers in different bands and narrowed it down to the twelve most likely prospects. You know. Twelve drummers drumming, for Christmas.”

“No, Charlie.” Damn him! “Like an interview process for a job.”

“It’s a lifetime commitment,” she sniffed. She wished he’d just let her get on with this. All these questions were making her have tiny doubts about the wisdom of her decision. She gave herself a mental shake. “I’ll do one a month until I hit on the right one. The exact right one. First I check out their musical talent and their band history.”

Charlie gave a roar of laughter. “Because that’s such a requirement for stability?”

“Because it has to be a drummer, so I need his performance history,” she snapped.

“Maybe it’s a different kind of performance you should be worrying about.”