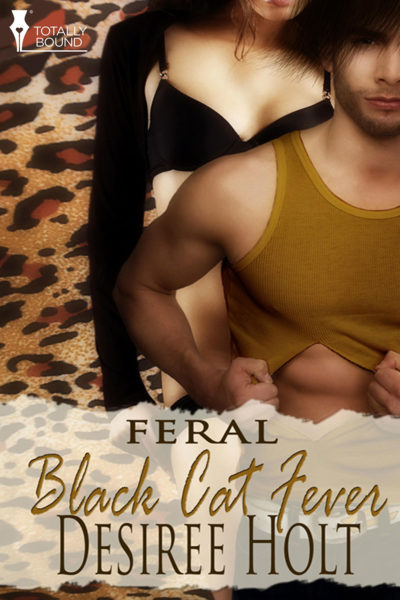 It’s Halloween, and for two special black cats the night when they must find their mates—or else.

Panther shifter Dea Russo waits each year for Halloween, the only night to search for her mate. As the daughter of the late pack alpha she has the power to pass along to the male she chooses.

But each Halloween passes without success until the night she meets Kyle Donovan, a man who pleasures her senses in every way possible—until mixed breed outcast Dane Maguire tries to stake a claim.

Darkness had settled over the city like a thick cloak, scudding clouds hiding all but the hazy image of the full moon. It was hot for October in Texas, but the fall weather was always unpredictable. And anything could happen on Halloween, weather-wise or otherwise.

Dea Russo leaned closer to the mirror in her bathroom, applying an extra layer of eye liner to her lids. She had to look her very best tonight. More than her best. Once again, it was the night for her to find her mate, and once again, she prayed for the success that had eluded her so far. At thirty-two, she was beginning to despair of ever making the connection.

“The time has not been right before,” Zia Stella had said just that morning when Dea had been complaining that she’d end up being an old maid. An old cat. Maybe someone’s familiar.

“Maybe he’s just not out there,” she protested.

“Dea. Bambina. It must be the right one.”

And that had been the problem. Year after year. For her kind, her breed of shifter, there was only one night to find one’s mate. Halloween. And the mate must also be a shifter of the same kind. No crossbreeding, she’d been warned. Others had tried it with disastrous results. The pack wouldn’t stand for it, anyway. Especially not with her. The daughter of the alpha.

“You know the story,” Zia Stella had told her over and over again. Since the death of her parents, her Zia and Zio were her closest family. “We came here from the Old Country in a small boat more than three hundred years ago, on the special night. There were not that many of us. Maybe two dozen. That was all that was left of a once-large pack. The moon was full when we landed and lit the way for us as we found places to hide before dawn. We had barely escaped massacre by other breeds and swore a solemn oath to keep the race pure.”

“You are the one to carry on,” Zio Rigo always reminded her. “The power passed from your father to you. The future of the pack depends on the proper selection of your mate.”

Yes, yes, yes. She could recite it by heart now. The problem was, she hadn’t been tempted by anyone at all, panther or mixed. So they were still without a permanent leader.