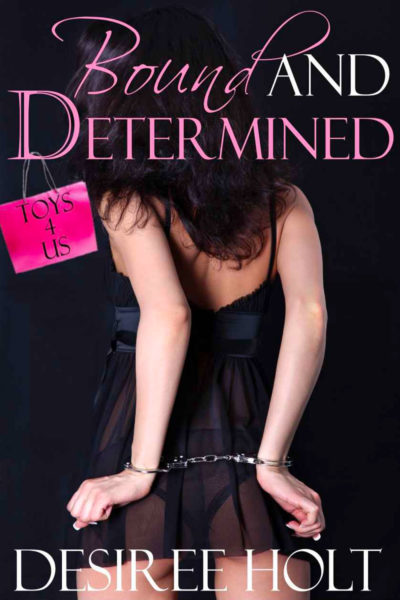 Alix Townsend, uptight, high-powered litigation attorney, has a wild side she rarely unleashes. Deep inside, beneath her tailored suits and frosty image, beats the heart of a woman who dreams of the kinkiest kinds of sex. Preferably with her next door neighbor, Mack Taylor.

“Those look interesting,” a deep voice drawled. “Planning to demonstrate them?”

Startled, Alix jerked at the voice, spilling the toys everywhere and knocking over her wine.

“Damn,” she swore and looked over to see her neighbor, Mackenzie “Mack” Taylor, leaning on the fence that divided their yard and grinning at her.

“You didn’t answer my question. Should I get a beer and settle down for the show.”

Heat crept up her face and Alix knew she blushed furiously. Damn it all anyway. Mack Taylor was one very fine specimen of man. Well over six feet tall, his body was lean and hard-muscled, and well on display since at the moment he only wore a pair of cutoffs. Dark hair worn just to his shoulders framed a rough-jawed face and accented the thick lashes that framed hazel eyes. The same dark hair was sprinkled liberally over his chest, arrowing down past his abs and disappearing in the waistband of his shorts.

Alix’s mouth watered at the site of him. She wanted to lick every delicious inch of his exposed skin.
Down, girl. I really do need to get out more.

She also wanted to run into the house and hide. Of all people to see her new playthings. She and Mack had been neighbors for two years, but they’d never done more than chat over the fence or in the driveway. There was definitely some chemistry between them but nothing either of them had ever indicated a desire to act on.

They were each busy with their own lives. She knew he was single and worked for the DEA, many times on an undercover assignment. Sometimes he’d be gone for weeks at a time. And she was always busy with one high profile client or another. Her big secret was that he had a starring role in some of her over-the-top fantasies and each time she saw him it was harder and harder to remain casual.

Especially with his interest in her little pink bag of toys. Not that she wouldn’t like a chance to try them out with him. She ducked her head in case her thoughts were written on her face.

“It’s…nothing for you to look at,” she stammered, pressing the Velcro tab on the bag closed and setting it on the ground beside her chair. She needed to get something to clean up the spilled wine, but somehow she couldn’t make herself move. Her body seemed disconnected from her brain.

“You look like you need a little help,” Mack teased. “Hang on.”

He vaulted lightly over the fence, pulling a rag from his back pocket as his feet touched the lawn and jogged over to where she was sitting. In seconds he had the wine blotted up and tossed the rag aside. Alix thought he’d say something else smartass then go back to his own yard, but instead he sat down on the side of her lounge chair, facing her.

“No problem.” His eyes landed on the pink bag next to her. “As my reward maybe you could show me all those goodies in that bag again.”

His grin could best be described as erotically lethal, she thought. Slightly crooked with–oh, god–a dimple at the left corner of his mouth. Reflexively she squeezed her thighs together. Unfortunately Mack noticed that tiny flexing of muscle and widened his grin. His big hand rested on her leg just below the knee, his fingers stroking lightly.
At once the air around them was charged with so much sexual electricity Alix wondered it didn’t incinerate them. From the look on Mack’s face she realized he felt it, too.