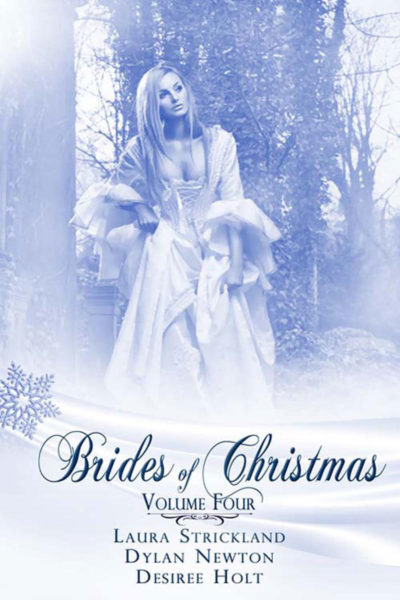 “Bang the Drummer” by Desiree Holt

Jill Kennedy has plans for a Christmas wedding. Now all she needs is a groom. A drummer who’ll keep her life as steady as he keeps the beat to his music. But with Christmas approaching and no groom in sight, she’s starting to wonder if she’ll ever bang the drummer of her dreams.

“The Tenth Suitor” by Laura Strickland

Edwina’s father has invited ten titled lords to spend Christmas at his medieval estate so Edwina may choose one for a husband. However, it soon becomes apparent the lords are more interested in gaining her father’s estate than Edwina’s hand.
Thorstan’s in attendance, but he hasn’t been invited, and he’s no lord. When Edwina is abducted, only Thorstan—a skilled swordsman—has hope of rescuing her in time for the promised Christmas wedding.

Werewolf Aribella Lupari-Gray is on her long-awaited honeymoon. Or at least, that was the plan. When she and Mason land in Ireland just before Christmas, their dream holiday turns into a nightmare: the pack’s werewolf children have all vanished. With Aribella’s life in danger searching the pups, there may not be a marriage to bless.

“I think I’ve got everything taken care of. Booked the Creekside Winery. Ordered the decorations. Set up a tasting for the food and Stella’s designing the wedding cake.” She glanced up at Charlie. “Why are you looking at me in that strange way?”

He gave her his familiar lop-sided grin. “You are the only woman I know who plans and pays for her wedding without knowing who the groom is.”

He threw back his head and laughed. “Yeah, I love your interview process. You aren’t even dating anyone right now.”

“Because look how poor my choices were in that arena, right?”

He snorted. “So this is better? Tell me how?”

Jill pulled up another memo on her iPad. “Okay. I have a list.”

If she didn’t need his help so badly, she would have smacked him. “It’s very specific. I asked around about different drummers in different bands and narrowed it down to the twelve most likely prospects. You know. Twelve drummers drumming, for Christmas.”

“No, Charlie.” Damn him! “Like an interview process for a job.”

“It’s a lifetime commitment,” she sniffed. She wished he’d just let her get on with this. All these questions were making her have tiny doubts about the wisdom of her decision. She gave herself a mental shake. “I’ll do one a month until I hit on the right one. The exact right one. First I check out their musical talent and their band history.”

Charlie gave a roar of laughter. “Because that’s such a requirement for stability?”

“Because it has to be a drummer, so I need his performance history,” she snapped.

“Maybe it’s a different kind of performance you should be worrying about.”