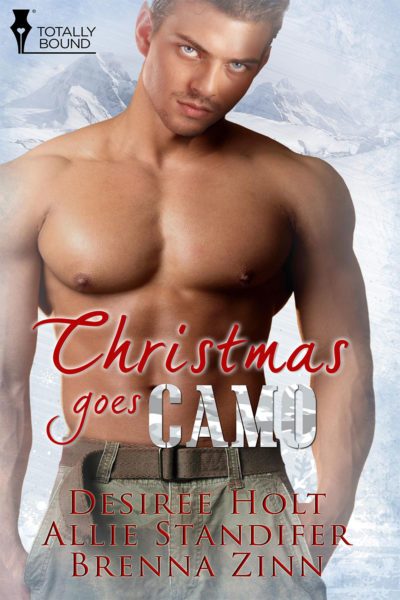 MELTING THE ICE by Desiree Holt

When an elf and an alpha male collide at the frozen South Pole, will the heat they generate melt the ice?

Sonia Snowflake, one of Santa’s elves and warriors, hates her new assignment—go to the South Pole with a team of three and scout a location for a new toy factory. It’s bad enough that it’s one week before Christmas, but they also have to dodge an angry Cupid who wants to downgrade Christmas, and three alpha military males who are also there on a mission.

Sonia’s grumbling lasts only until the very alpha Jaguar Martin is literally blown into her tent. The explosive chemistry between the two is so intense they can’t keep their hands off each other. Their situation is complicated even more by the drug, Thermavan, that Jaguar and his team are testing. Created to maintain body temperature at a steady 98.7, it has a side effect of maintaining constant sexual arousal.

How will this effect their respective missions, and what happens when the interlude comes to an end?

The huge sleigh swept across the sky, B.E.L.L.S. jingling with the swaying motion as wind currents buffeted it this way and that. The reindeer pranced on the frozen air, their breath making little tiny puffs like cotton clouds. The driver, in his heavy green outfit that covered him from head to toe including a warm cap that came down over his ears, hummed Christmas carols to himself. His passenger huddled into her seat, a green and red plaid blanket wrapped around her as she cursed under her breath.

It’d been bad enough when that fat old man in the red suit had announced he was building a second headquarters and toy factory at the South Pole. The South Pole! Hadn’t anyone told him it was colder down there than at the North Pole? Apparently he didn’t care. Now, he was sending the three of them off one week before Christmas! They should all be busy with the last-minute preparations instead of off on this wild-ass idea.

“Buckle up,” he’d told the three B.E.L.L.S. he’d chosen when he’d called them in for a meeting. “We’ve outgrown our current facilities, as I’m sure you’re all aware. With this new age of electronic toys, we are just flat out of room to work.”

“Why can’t we just build more buildings up here?” someone had whined.

He’d turned his famous glare on the elf who’d dared to speak out. “Because I’ve decided we need two completely separate locations. Did you want to argue with me?” He waited but they were all silent. “All right, then. As I was saying, it’s time to expand our horizons. I trust, as you explore the area, that among the three of you, someone will find the perfect spot to build our new location.”

It was bad enough that they couldn’t search as a group. He’d quite deliberately given each of them a separate section of the South Pole to explore. Alone. He didn’t even let them land together. Oh, not. Not him. The team of reindeer, the fastest in the herd, had dropped them in three different locations with all their gear. The only additional assistance they got was the ‘helpful hint’ that they could use their magic powers when they needed to.

She hadn’t even been scheduled to go on this stupid trip to begin with. She’d had other assignments as the Important Night approached. But then she’d suddenly been appointed head of the new southern toy production factory and put in charge of the trip. As if she didn’t have enough to do already.

“Aren’t you the Battle Elves trained in Logic warfare and Land defence Scouts?” He rubbed his red nose. “Who else would I send? Word has arrived that Cupid, with his Red Army of Vinions, is on the warpath again.”

“Somehow that deranged archer has learned of our expansion plans,” Mrs. Red Suit had told them. “We understand he’s marshalling his forces and his magic to stop us.”

“That’s right.” The big man sighed. “He’s still doing his damndest to make Valentine’s Day bigger than Christmas. So you see? You’re the logical choice for many reasons.”

The other members of the team had also been replaced by B.E.L.L.S., so they’d be heading down south as a well-armed and well-trained team of elf warriors. And the B.E.L.L.S. had orders to thwart Cupid and get on with business.

But that was only part of it. Preparations had barely been underway for the trip when they learned the U.S. military planned to parachute three of its best and brightest trained war machines on some kind of secret, ten-day survival mission right where the B.E.L.L.S would be scouting. Apparently, some dipshit thought the South Pole would be the perfect place to do whatever it was they were supposed to be doing.

So now, in addition to everything else, they had to watch out for these stupid humans and make sure they didn’t cause trouble. The B.E.L.L.S. were told to foil the military any way they could. After all, toy manufacturers and military bases didn’t exactly mix. How can you have a toy factory going full tilt in the middle of dangerous war games?

Why me? What did I ever do to deserve this miserable honour?

The only bright spot, if you could call it that, was the fact that, at the South Pole, they were still in the middle of the six months of sunlight rather than the six months of darkness. Battling winds that could blow an elf straight back to Toyland was bad enough without doing it in the pitch dark.

“Almost there,” the driver called back to her. “Better buckle up for landing.”