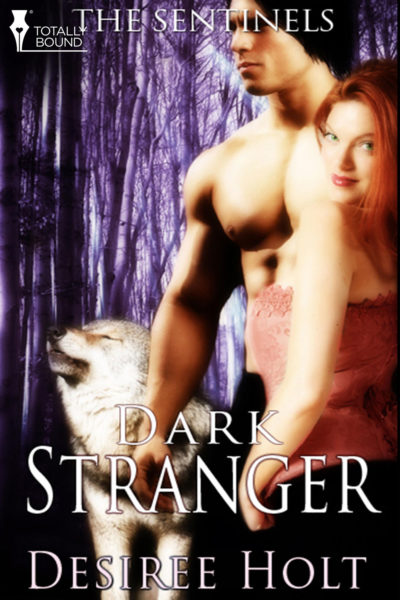 Meet the Sentinels — eight shapesfiters, all that’s left of a once powerful pack, who have formed a protection and investigation agency, serving both in wolf and human form, who continue to search for other shifters to re-establish a pack.

When Kelsey Bryant retreated to the Maine woods to take a long look at her life, she wasn’t prepared for the dark stranger she met or for his hidden secret.

Feeling an emotional letdown after the marriage of two of her partners in The Sentinels, shapeshifter Kelsey Bryant borrowed the Maine cabin of one of her partners and retreated to isolation to take a good look at her life.

What will happen then?

The cabin was a wonderful blend of rustic and comfort, nestled comfortably deep in the Maine woods. The view was spectacular—trees all around, the wonderfully fragrant Maine pines, a clearing where deer came to nibble at the grasses, and a natural rock terrace into the ravine on the other side. And the sunrises. Now she understood the phrase ‘the edge of morning’. The moment when night shed its gown of darkness and the life forces of daylight paraded forward. Time for dark secrets to be hidden away and for the sunlight to open up all the corners of the earth to visibility. The blending of the two sides of nature had a magical mystical quality to it,

But after three days, Kelsey Bryant was beginning to go stir crazy.

Not that she didn’t appreciate the loan of the cabin from her partner, Luke Spencer, and his wife, Sierra, who actually owned the place. And when Sierra had made the offer, it had seemed like just the right place to take a look at her life the way Sierra had done two years ago. And look what Sierra had gotten out of it! Luke!

Not that Kelsey expected a hot, sexy man to come out of the forest, shape shifter or otherwise. But she was getting antsy with only herself for company, a situation she wouldn’t have expected. Usually, she was known as the loner of The Sentinels, the shadowy security and protection agency she owned with seven other shifters. Since they’d been forced to flee Northern Michigan after the rest of their pack was decimated, she’d kept pretty much to herself, focusing only on her work.

Now, however, the two she was closest to, Luke and Brian Spencer, the ones she thought of as brothers, had found their mates and settled into their own lives. Despite all their efforts to include her as much as possible, Kelsey was feeling like the odd man out.

It wasn’t as if she could just go out and meet someone. Over and above everything else, which included her innate suspicion of other people, was the fact that she was a shape shifter. A human who could assume the form of a wolf. Or, if you preferred, a wolf who could become human. Most people didn’t even think shifters were real and thought they were creatures made up to scare children or to blame unexplained things on.

But they were real enough. All the members of The Sentinels could attest to that. Hunted almost to extinction by uneducated townspeople, they had fled to Texas and found safe haven in the Hill Country just outside San Antonio. Now they spent their lives in two pursuits: protecting and helping others and seeking other disconnected shifters to recreate a solid, functioning pack.

That was another dilemma Kelsey battled with. Lately, she’d begun to question her protection and tracking skills, her ability to contribute to the missions of the agency. A case had gone sour, and while the other partners had pointed out to her that they’d been called in too late, in Kelsey’s mind, it was her own dwindling skills that had contributed to the failure.

So here she was, trying to take a good look at her life and decide if she had suddenly become the odd man out. Of everything.

Twice since arriving at the cabin, she’d shifted and run through the surrounding trees, careful to avoid any humans who might be tramping through the woods. She ran mostly at night, loving the feel of the wind in her fur and the clean smell of the forest. It also gave her a chance to test her abilities, to see if it was only her human abilities that were failing. It was a question she was still wrestling with.

Right now, though, at this very moment, all Kelsey wanted was some non-demanding companionship of any kind. Something to break up the monotony. And she wasn’t going to find it here, isolated from everyone else. She’d stopped at the little town of Rock Creek, about five miles down the road, to stock up on supplies. Driving down Main Street, she’d spotted what she thought was a bar. No, a tavern. Towns like this didn’t have regular bars. She hoped the place wasn’t a total dive, and that they’d have either something decent to drink or someone halfway acceptable to talk to.

Shrugging into her jacket, she grabbed her purse and keys, locked the door and cranked the engine on her new, fire-engine-red Jeep. Everyone had teased her about the colour, reminding her it was hardly inconspicuous. But the polished red surface always cheered her up, and when she needed to not be seen, she borrowed one of the agency’s vehicles.

Rock Creek appeared to have only one main road running through it. Big shock. Almost everything was dark on the short street, not surprising since Sierra had told her the streets rolled up right after dinner. The only light came from the tavern at the end. An amber glow showed through the window and a neon sign proclaimed the name of the bar—quaintly enough, ‘The Bar’.