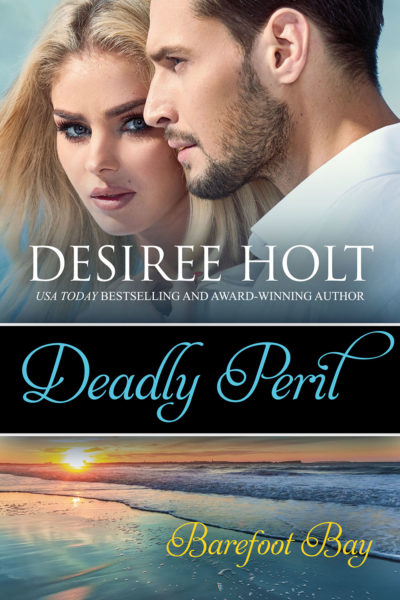 It was bad luck that had Robin Hanna working late the night her boss, already in trouble with the feds, had two late visitors. Worse luck for him when they shot him dead. Barely escaping the men chasing her, she connects with Jonas Faulkner, the FBI agent who she’s been helping build a case against her boss. In less than twenty-four hours, they whisk her out of town and off to the Casa Blanca Resort and Spa in Barefoot Bay, Florida. If she has to hide away, she gives thanks for the hiding place they picked…a luxury resort.

The old saying about the best laid plans of mice and men going astray would definitely apply to Trey DeMarcus. He had his life all mapped out: a beautiful wife, a career in JAG, and then retirement to Montana, a state where he’s always wanted to live. But, along the way, his wife objected to both the kind of law he wanted to practice and where he wanted to live. Her divorcing him on the day he retired from the Navy cut him to the quick, and in a year he hasn’t healed. Which is why he’s on a forced vacation at the Casa Blanca Resort and Spa.

When these two meet up at Barefoot Bay, they have nothing in common except lives in chaos. Robin is terrified the killers will find her, and Trey has vowed never to risk his heart again, But Barefoot Bay works its magic, and soon the electricity between them lights up the sky. But when Trey gets the wrong impression of something, this second chance for both of them could be sunk in the waters of Barefoot Bay.

She walked along the path slowly, enjoying the sight of the gorgeous landscaping and the sound of he birds singing as they hopped from leaf to leaf. What a paradise this place was.

Too bad I’m not sharing it with someone.

As soon as the thought hit her she banished it. Exactly what someone would that be? Since her last relationship, if she could even call it that, had died of boredom she had buried herself in her work. And of course, when she discovered what was going on at Forrester, dealing with it consumed every bit of her attention. No, no relationships for her until this mess was sorted out and she knew what direction her life would take. The first thing she’d need to think about was getting a new job.

Maybe she’d move. She really had no ties to her current place. Her two closest friends had moved on in their careers, moves that had taken them to different cities. She had no significant other in her life. Not even an insignificant other. Was it time for a career change?

She was so busy talking to herself in her head, when she reached the outdoor restaurant and headed for an empty table, she had to quickly move out of the way of the waitress. That led to her bumping in to a man seated by himself, just lifting a cup of coffee to his lips. And that led to a coffee disaster on both her clothes and his.

“Oh, my god.” She could feel the blush creeping up her cheeks. “I am so very sorry. Here. Let me fix that.”

Determined to help him blot up the liquid, she reached for the extra napkin on his table and knocked over the full glass of water. So now the table was drenched and his clothes were a soggy mess of coffee and water. She was sure the heat on her cheeks had nothing to do with the temperature in the air.

With the napkin still in her hand, she reached to blot the material from the fabric of his Bermuda shorts then jerked her hand back when she realized it hovered directly over his fly.

“Oh. I-m—“ She thrust the napkin at him. “Here. I think I’d better leave before I embarrass myself even more.”

And then she got a good look at him and nearly fainted. Could you actually imagine someone to life? Because this man look just like the one she’d been imagining on her walk here from the villa.

He laughed, a low rough sound that brought her back to reality and remade long neglected parts of her body beg for attention. Oh, right. Just what she needed.

“Not a problem. I’ll just run up to my suite and change.”

She figured she’d better get out of there before she humiliated herself even more. She hurried back through the tables until she was away from the deck then raced for her villa. Maybe she could hide in there until whoever that was went home. From his vacation.