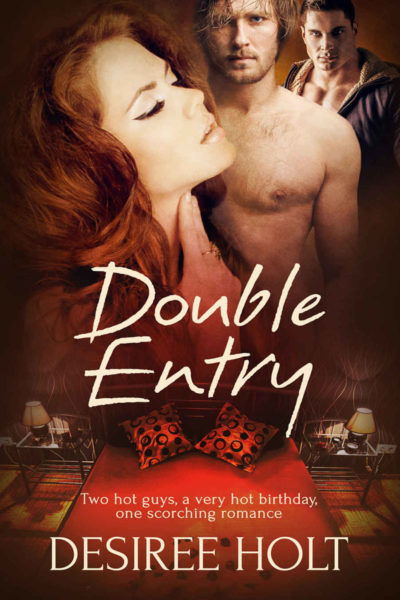 Publisher’s Note: This book has previoiusly been released as part of the Three’s A Charm anthology with Totally Bound Publishing. 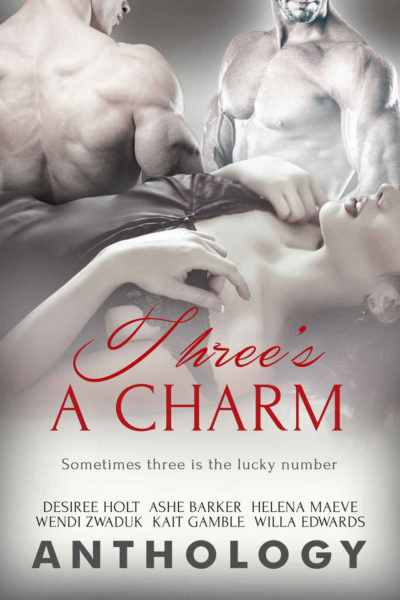 The banging on the door sounded like kettle drums in Lauren Henderson’s head. She pulled the pillow around her ears to shut out the noise only it just got louder.

“Go away,” she shouted, cringing as sound reverberated through her skull. That would teach her to drink too many appletinis.

“Lauren, I know you’re in there.” Her friend Marcia’s voice had all the soothing qualities of a screech owl. “I’m not leaving until you open this door.”

Muttering curses and imprecations, Lauren dragged herself off the bed and stumbled to the front door, turned the lock and threw the door open. “I’m up, okay? Now go away.”

Marcia pushed her way inside and shut the door. “I think it’s great you decided to flash the neighborhood. You might want to brush your hair and put on some makeup first.”

Lauren squinted her eyes open and looked at herself. Naked from head to toe. Great, just great. She plodded back to the bedroom and grabbed her long T-shirt from beside the bed where she’d dropped it. Last night putting it on had seemed more effort than it was worth.

She opened one eye and stared at Marcia, too perfectly dressed and put-together for the night they’d just had. “How come you’re not hungover and looking like trash?”

“Because I stopped after two of those headbangers and drank iced tea.” She tucked her smooth blonde hair behind one ear with a nail polished with hot pink enamel. The emerald stud in her lobe winked in the sunlight. “Unlike you, my friend, who tied one on bemoaning your birthday, the lack of available men and the reasons why all the good ones got away.”

“Crap.” Lauren raked her fingers through her thoroughly disheveled hair and ran her tongue around her mouth. Her garbage disposal would probably taste better.

“Yup. That’s exactly what you look like. We’re going to fix that right now, though.”

“You’re going to shoot me and put me out of my misery?” Lauren looked at her friend hopefully.

“Better than that. I’m giving you a birthday present.”

“I told you I’m not celebrating anymore. I passed that stage,” Lauren pointed out.

“So this is an exception.” She pushed Lauren toward the bathroom. “Go shower and turn yourself into a human. I’ll make coffee. Go! Now.”

Fifteen minutes later Lauren was feeling marginally better and hoping the coffee she was drinking would wash away the rest of the cobwebs. Maybe even the entire previous night, which she was beginning to remember in uncomfortable bits and pieces.

She scowled at Marcia. “So what’s this business about a present?”

“I’m only fulfilling your wishes, m’dear.”

Lauren got a sudden pain in her stomach. Did she really do what she’d thought she’d only imagined? Naw, she couldn’t have done that. Could she? Marcia’s next words dispelled any hope she was wrong.

Marcia reached into her purse and drew out a folded piece of paper which she flapped open with a flourish. “I have here this interesting piece of paper titled Lauren’s Birthday Wish List.”

Lauren lunged forward and tried to rip it out of her friend’s hand.

Marcia stood up and moved out of reach. “No, no, no.” She laughed as she dangled the paper in the air. “You wrote this and I’m going to read it to you.”

Lauren growled and reached for the paper again.

I would like twenty-four hours to experience the following—

Being lashed with a suede flogger

Marcia folded the paper, put it in her pocket and picked up her coffee mug. She fanned her face with her hand. “I had to stop reading after that, honey. This was too hot even for me.”

Lauren buried her face in her hands. “Please tell me you’re going to destroy that.”

“Are you kidding? You’re thirty years old and the most adventurous thing any of your lovers has ever done is fuck with you on top instead of the bottom. It’s time for you to live, girl. Really live. And I’m going to make it happen.”

“Too late. I’ve already made plans.”

“W-what are you talking about?”

“Come on.” She tugged Lauren out of the chair. “I bought you two gorgeous men for your birthday and they’re in the process of preparing as we speak. Tonight’s your lucky night.”

“Oh my God.” Lauren covered her face. “You can’t be serious.”

“Where did you scrounge up two men on a moment’s notice?” She made a face. “I’m not desperate enough for scumbags yet.”

“Not to worry.” Marcia smoothed her hair again. “It took just one phone call. They were very eager to accept.”

“No buts, kiddo. It’s time to take that stick out of your ass and live a little.” She grinned. “Think how much fun you’ll have. Now move. We have things to do.”

“What kind of things,” Lauren asked as Marcia propelled her toward her bedroom.

“First of all, we have a full session at Ready for Sex.”

Lauren stopped. “Isn’t that the place…?”

Lauren dug in her heels. “Marcia, I’m not doing this on film, no matter what you say.”

“Don’t be stupid, of course not. Now come on. Get ready. Chop chop.”