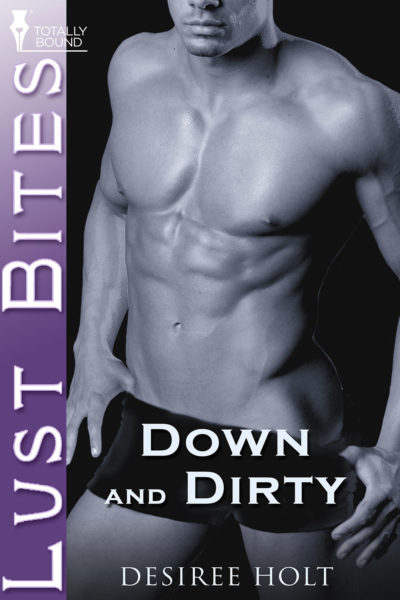 When Krista North accepted the invitation to wealthy cowboy Clint Brody’s famous barbecue, she had no idea she’d end up being the dessert-for him and his friend Shane.

New to Texas, Krista North reluctantly let her friend drag her to hot, wealthy cowboy Clint Brody’s famous annual barbecue. When he found her in his family room trying to clean off a spilled drink, he convinced her taking a shower would be a better idea. With him.

Krista North pulled the souvenir bandana from the pocket of her jeans shorts and used it to blot the perspiration gathering on her cheeks and neck. Damn, it was hot. Not even the faintest of breezes stirred the leaves of the giant oaks surrounding the party area or the crepe myrtles standing guard in their rock beds.

She didn’t think she’d ever seen so many people jammed into one space at the same time, even though the space was huge. At the bar. At the barbecue buffet table. Seated at the round tables that had been set up. Or just jammed together in clusters claiming whatever space they could find. And all of them seemed to be talking at the same time, at a fever pitch loud enough to be heard over the band playing off to one side.

Leaning against a tree at the edge of the crowd, she let her eyes travel to the horizon. The Lone Eagle Ranch stretched as far as she could see. Lynn had told her it was more than fifty thousand acres, one of the five largest in the state, and ran an enormous herd of Santa Gertrudis cattle. Besides the ranch, the owner, Clint Brody, had invested his money in real estate, electronics and an oil recovery firm. The chatter on the street was that whatever he touched made money.

She had yet to meet the man himself. She’d seen photos of him in the newspaper, usually with some gorgeous female on his arm, sometimes two. He smacked of arrogance, although he’d probably earned the right. He was also, at least in black and white, the sexiest man she’d ever seen. She wouldn’t mind having him star in a few of her sexual fantasies. Of course, her chances of meeting him in this unruly mob scene were slim to none.

Krista tilted the bottle of Lone Star beer in her hand and took a long, refreshing sip, wondering how the hell she’d ever let herself be talked into coming here to begin with. Oh, yes. Lynn. Her new self-appointed social director.

“Come on,” she’d urged, waving the invitation in front of Krista’s face. “I don’t want to go alone, and you can’t spend your life cooped up in your apartment.”

Lynn and Scott lived in the apartment just below hers. Except for work hours, she seldom saw one without the other.

“Taking care of family business in Montana.” She heaved a sigh of exasperation.

“Yeah. He was ready to leave for the airport when they had a huge storm. The roads are washed out. Can you believe it? Everyone in Texas wants to go to Clint Brody’s annual bash and poor Scott is stuck in the boonies.”

“Just how did you get the invite?”

“Our firm handles the web site for the ranch so we all get to spend one day a year pretending we live up there with the rich folks. Scott insisted I go, and I refuse to show up solo.” Lynn put on her poor-me face. “Come on, sweetie. You’ve been here five months and you’ve hardly met anyone.”

True, but for good reason. She’d had enough of people in her other life, especially Douglas who’d freaked out when she’d wanted to spice up their sex life. No, she was better off at home with her prized collection of toys and her fantasies.