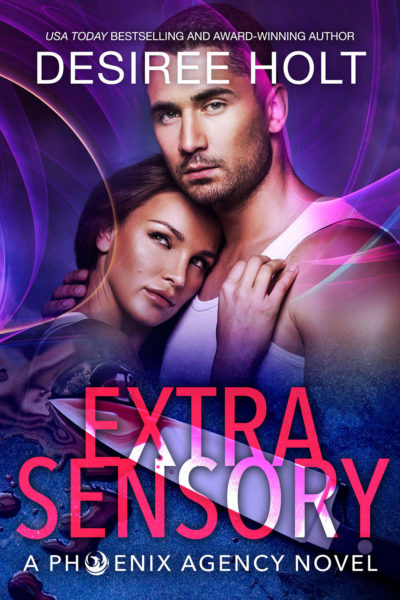 Art historian Mia Fleming has battled with skepticism about her precognitive skills all her life. But her visions about Carpenter Techtronics are so vivid she sends anonymous emails and makes an anonymous call. After having a vision of a gorgeous man that leaves her frantic with desire, Mia is shocked when the man himself shows up in her office sending her silent messages.

Dan Romeo, CEO of the mysterious Phoenix Agency, is in town to help his friend Chase Carpenters track down whoever is threatening Chase’s company. When he meets Mia, he has a hard time thinking about anything but what he’d like to do behind closed doors with this intriguing woman. The electricity between Dan and Mia is so intense they find themselves in bed together before they’ve hardly completed introductions. But then bodies begin falling. As Mia’s visions escalate, so does the explosive relationship between her and Dan. When an attempt is made on Mia’s life and she is almost killed, Dan and his team must race to find the culprits before they can strike again—or put Mia down for good.

Her sleep, what she got of it, was broken and uneven. Images from past visions invaded her dreams, bombarding her senses and confusing her brain. She found herself waking frequently and afraid to let sleep return.

Pathetic, Mia. Get a real date.

She was exhausted by the time Monday morning came around. Listlessly she dressed for work, picking up her newspaper before she left the house. She stuck it in the car with her briefcase, determined to wait until she got to her office to see if there was any new mention of Chase Techtronics or its possible new project. She stopped in the little employee kitchenette to get a cup of coffee. Then, settling herself at her desk, juggling everything with her good hand, she opened the paper to the business section and began scanning the articles.

“Looking for something special?”

She hadn’t heard the man come in and his voice startled her so. When she looked up she jerked her hand so hard she knocked over her coffee. It spilled onto her desk and dripped onto her skirt.

It was him! The man from her visions. But who was he? And what was he doing in her office?

“I’m sorry.” His voice was deep and rich, like warm, thick honey. “I didn’t mean to startle you.”

Mia closed her eyes, counted to ten, then opened them again, hoping he’d have disappeared.

“Miss Fleming?” She opened her eyes. He was still there. “Here, let me help you with that.”