Eyes of the Wolf 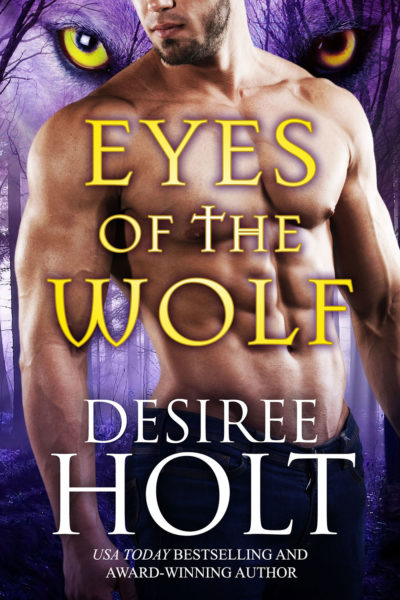 When Jamie Dalton moved into the house her grandparents left her she was just looking to reconnect with her past and settle in familiar surroundings. Digging through the attic for treasures, she found a nearly life-sized statue of a wolf and a very old, very strange book, Legends of the Werewolf. Each night after returning home from her job as the town’s head librarian, she curled up in a big chair with her little black cat, Mischief, fascinated by what she read. She was shocked when her new neighbor, Mike Volka, introduced himself and the eyes watching her looked just like the wolf in the book.

Mike Volka’s ancestors once owned Jamie’s house and the book that is his heritage as a wolf shifter, the one that will guide his future, is hidden somewhere inside. He sure didn’t expect the intense sexual heat the erupted between them. When he sneaks into her house and sees her asleep in the big chair, the book open on her lap, the temptation to have her is too great for him. Using the hypnotic power of the shifter, he draws her into his web and they have sex so hot it nearly burns down the house.

But can a union born in stealth survive? Is she the human mate his family had told him might be waiting for him? Will Jamie succumb to his hot alpha impact and can she believe what others dismiss as a fanciful legend? On Halloween night it will come to an explosive conclusion but will the heat consume them or bind them closer together?

Ohmigod! Her hands tightened on her bag even more. His voice was so rich and deep it sent shivers up her spine. She turned slowly, careful not to dump anything out of the filled-to-the-brim bag. Unexpectedly a sliver of shock raced through her. There was something eerily familiar about him. Did she know him? Impossible. He was new to the neighborhood and until right now hadn’t had any personal contact. Still, she was stunned at the heat she felt shimmering in the air. And the instant response of her body.

He jogged up to her tiny porch, stopping about a foot away. Damn! If his voice was sexy the man in the flesh was too sinful to be let out in public.  He was tall, over six feet, she figured, with the lean body of a runner. Thick dark hair swept back from his brow and fell below his shirt collar. Thick eyebrows as dark as the hair on his head and eyes an odd shade of amber highlighted a face with the sculptured look of an artist.

Jamie licked her lips, wondering what his full mouth would taste like.

She was so pitiful. She needed to get out and date more. Or have some stupendous sex. Or something close to it. Obviously that was her problem.

“Um, hi! I’d offer to shake hands but as you can see mine are full.” Well, that was certainly stimulating conversation.

“So I see.” Before she even realized what he was doing he eased the bag from her arms. “So you can get your keys out.”

“Oh. Oh, yes.” The touch of his hands had nearly singed her skin and for some ungodly reason made her think of a graceful beast streaking through a forest.

Feeling like an idiot she fumbled in her purse where she’d accidentally stuffed her key ring. When she had the door open she turned to take the bag from him.

He grinned, the curving of his lips so sexy her panties nearly melted. Good lord! She was in worse shape than she thought.

“Volka. Miko Volka.” There was that hot smile again. “Slavic for Michael. It means “Gift from God.”