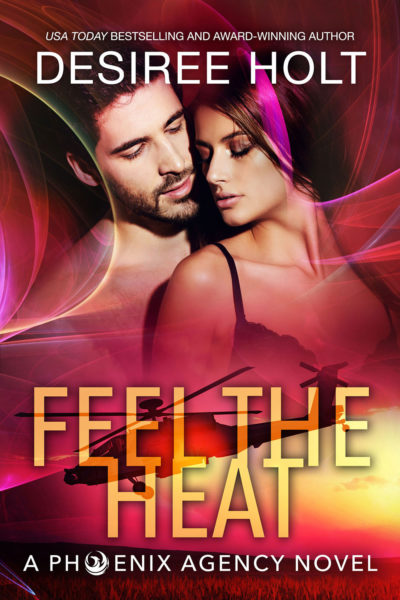 The Phoenix Agency
They served their country in every branch of the military—Army Delta Force, SEALs, air force, marines. They are pilots, snipers, medics—whatever the job calls for. And now as private citizens they serve in other capacities as private consultants training security for defense contractors, as black ops combatants eradicating drug dealers, as trained operatives ferreting out traitors. Along with the women in their lives, each of whom have a unique psychic ability, they are a force to be reckoned with. Risen from the ashes of war, they continue to fight the battle on all fronts.
They are Phoenix.

Feel the Heat
Lauren Cahill lives as quietly as she can, protecting her ability as a psychic healer. But danger brings Troy Arsenault into her life—along with scorching sex and intense emotions. Resisting him isn’t even a question, in or out of the bedroom. He protects her from the evil stalking her even as he teaches her what erotic sex is all about. When she’s kidnapped, his world is turned upside down and he employs all the resources of The Phoenix Agency to rescue her. He won’t rest until she’s back safely in his life—and in his bed for the rest of their lives.

When the doorbell rang, she was gripped by a sudden attack of nerves, her palms sweating for no reason. She wiped them on her jeans and looked through the peephole. What she saw was an identification folder with a photo ID and Troy Arsenault, Phoenix Agency, in black capital letters, along with the Phoenix logo.

“It’s me,” he called through the door. “Maybe you’d better let me in before your friends out here decide to join me.”

She cracked the door a little, and her heart sank when she realized some of the reporters and photographers had wandered back closer to the house, apparently hoping to catch a glimpse of her. Or to get a quick shot at her before the cops chased them away. At least they were staying off of her lawn. A cruiser would be driving by again before too long and they’d get chased away. She swallowed hard against the sudden rise of panic.

I won’t give in to it. Everything’s going to be fine. They’ll go away, and I can have my life back.

Summer slid off the safety chain and opened the door just enough for Troy to slip through. When she closed it, she hooked the chain again and turned the deadbolt. Then she turned to the man in her foyer.

She was prepared to be polite, let him do his thing and send him on his way. But when she looked at the man standing there, her tongue stuck to the roof of her mouth and all her breath was trapped in her lungs. Faith had told her Troy Arsenault was a former SEAL and as far as Summer was concerned, he could have been the poster boy for recruiting. He was as tall as Mark, with a lean runner’s body and deeply tanned skin. His light brown hair was just a tad long, curling at the neck of his shirt, the kind of hair a woman wanted to run her fingers through.

But it was his face that was the most arresting. Ruggedly handsome, like Mark, high cheekbones were slashes on either side of his nose and eyes the color of melted chocolate studied her from beneath unexpectedly dark eyebrows and lashes.

Her reaction to him was hot and totally unexpected and she made a deliberate effort to tamp it down. For one thing, he was only here to make sure she was safe. For another, her history with men was so unpleasant that she’d decided to swear off them completely. The last thing she needed was to have her ruthlessly controlled hormones decide to take a walk on the wild side. How terribly inconvenient that those hormones chose this particular moment to start galloping through her system again. Maybe she should have insisted harder to Faith that she didn’t need anyone.

“Looks like you’re pretty popular with the folks out there.” His mouth curved in a smile but his tone was dead serious. When she didn’t comment he asked, “You okay?”

Summer gave herself a mental shake. What was going on with her? She had a problem here and this man had kindly agreed to come check it out as a favor to her friends. This was business, not pleasure. She’d hoped for someone at least appealing to look at but Troy Arsenault had danger written all over him.

“Sorry.” She didn’t know if her hands trembled because of the mob outside or the nearness of this man. She shoved them into the pockets of her jeans.  “Thank you for coming over here, although I don’t think it was really necessary.”

“From what I saw outside, this may be a little more serious than you think.” He held out his hand. “Troy Arsenault. But you already know that, right? Nice to meet you, Summer.”

“Same goes. And the idiots outside will probably go away the next time a police car comes by.”

He lifted an eyebrow. “Yeah? Doesn’t look like it to me.”

She suddenly found herself tongue-tied. What happened next? “Um, would you like some coffee? I made a fresh pot.”

“Thanks. That would be nice.”

She led the way into her kitchen and motioned for him to have a seat at the table. Figuring the first rush of phone calls would have subsided by now, she picked up the receiver from the counter and replaced it in the cradle. Her hand hovered over it a moment as she waited to see if it rang. When it didn’t, she breathed a sigh of relief and turned to occupy herself taking down mugs and filling them. As she poured the coffee, she tried to focus on the situation and not the man. Troy Arsenault had an electric magnetism about him that made the air sizzle and scrambled her brain. And that was the last thing she needed right now.