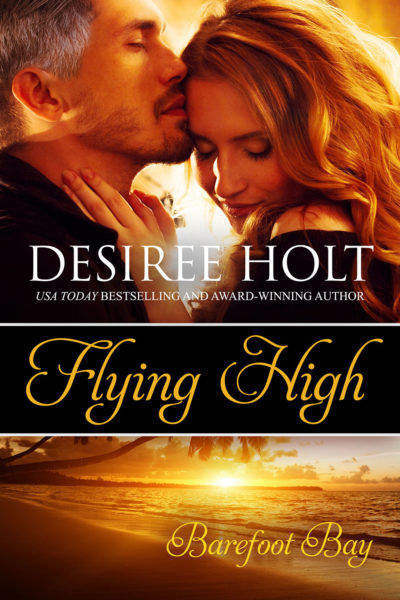 When Zak Wallace’s uncle offered him the chance to fulfill his dreams with a job flying for his Alaska charter service, no way was Bailey George going to hold him back. Flying was Zak’s life, maybe even before her. And it was no place for a brand new wife with a baby. Which is why she never told him about the unexpected, unplanned pregnancy. Or answered his letters or returned his calls. Instead, she moved away, got her law degree, and raised her son with the help of her family and friends.

But fate always throws a curveball. When Bailey is charged with running a retreat for her law partners at Casa Blanca Resort and Spa at Barefoot Bay, the last person she expects to run into is Zak. It seems he bought his uncle’s business then, years later, sold it and opened a new one in Atlanta, and has just flown a client to Barefoot Bay.

They are stunned to see each other but manage to get past the initial shock and Zak’s anger at the way she cut him out of her life, and enjoy three wonderful days and nights, when she isn’t in meetings.

But any chance of a future comes to a shrieking halt when Bailey’s son, the image of Zak, shows up at Barefoot Bay. Zak is a raging maniac, and Bailey’s son is none too happy. But Barefoot Bay is known for love and happiness and healing. Maybe it will work this time for three people tempted by a future together.

As he’d figured, most of the people were coupled up. However, three tables held groups of women, laughing over their drinks. Zack didn’t remember the last time he’d just sat and done nothing. Not since he’d flown off to join his uncle. In Alaska, there was always something to do. That didn’t get any better when he moved the company to Atlanta and most of the responsibility fell on his shoulders.

Or maybe it was just that he chose to fill every minute of his time so he wouldn’t have a lot left over for thinking. Alaska had been wild and exciting and adventurous, but there was still a hole he couldn’t seem to fill. Atlanta was different, but the emptiness was still there. And sometimes he wondered if he’d made a mistake. After all the years with the wide-open spaces in Alaska, the big city was giving him claustrophobia.

He tilted his head back to take another swallow of beer, and a memory flashed across his brain. He and Bailey had been sitting on the floor of the tiny living room in their tiny apartment. The day had been hotter than hell, and the air conditioning wasn’t always reliable. He’d picked up cold chicken and beer for dinner, and they were having their own little picnic.

Bailey had picked up her drink, tilted her head back and taken a long, slow swallow. He could see the sexy line of her neck and the flex of her throat muscles as she swallowed. Unable to help himself, he’d leaned over and licked the length of her neck, a slow swipe of his tongue. Bailey shivered at his touch, so he did it again. Before he knew it, he’d put the beer aside and had her flat on her back, her T-shirt off, and he was tasting every bit of her body.

God. She’d tasted like the finest ambrosia, a taste that—

He couldn’t keep torturing himself this way. Damn it. After twenty-four years, he should have gotten past this. To distract himself, he shifted his gaze to the interior of the hotel. The doors to the patio were wide open, giving him a clear view of everyone moving around inside. It was almost like a movie set, he thought, with the magnificent architecture, the gorgeous Moroccan wood and wall hangings in the lobby, the people in their resort clothes. If he did nothing else, for three days he could enjoy himself people watching.

Out of the corner of his eye, he caught a flash of green that jogged a memory. Bailey had loved that shade, a good color for her with her rich auburn hair and creamy complexion. Every time he spotted a woman wearing it, his breath caught, as he wondered if it was her.

The woman had walked into the lobby with someone, and they stopped for a moment to chat. He squinted to give himself a better look. God. She even stood the same way Bailey did. Had the same shade of hair, now pulled up in a ponytail. When she gestured, Zack had to blink his eyes because Bailey did exactly the same thing with her hand when she was talking.

He stared hard at the woman, wondering if he was finally losing his mind. Then she turned in his direction, and he was sure of it. His beer forgotten, he pushed back from the table and made his way into the lobby. This had to be a mistake. It just was not possible. He’d thought so much about her so much he was seeing her in other women. That’s what it was. Because there was no way…

She turned fully in his direction, and he nearly passed out.

“Zack?” Every drop of blood drained from her face. “Oh, my god. Zack?”

Then, in unison, they said, “What are you doing here?”