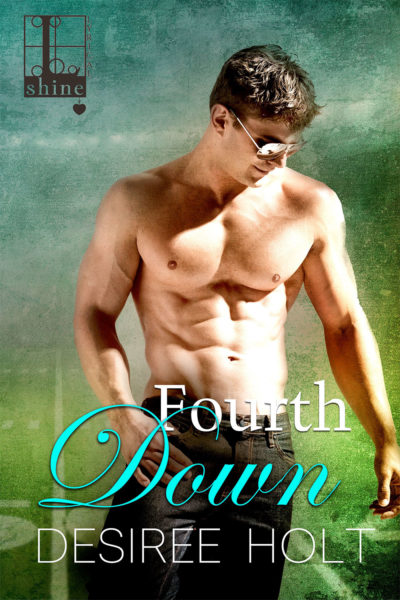 When her relationship goes up in flames, Holly Funchess jumps straight back into the heat—by becoming a firefighter. Running as far away from her past as she can, Holly trains hard and lands a job with a small San Diego firehouse. With everything to prove, she has no problem putting her love life on the back burner. But where there’s smoke…

A former football player with a string of failed relationships behind him, Chase DeMarco has put his all into his Coast Guard career and the youth football team he coaches. He’s not about to let anyone distract him—especially Holly, the woman at his gym who seems to relish getting under his skin. But when their skirmishes turn into full-contact workouts—and they face off against the dangers of their jobs—Chase and Holly must choose between letting the clock run down or playing to win…

He wanted to forget the whole conversation. Too bad that out of the blue his thoughts turned to the sassy female he’d met at Pump It Up. God. Talk about an attitude. The chip on her shoulder was the size of a boulder. Yet, he couldn’t forget her tall, toned body with the legs that went on forever. Or the high, round breasts or the nice tight ass with muscles that flexed when she walked.

The mental image of her sent a message straight to his cock. The damn thing hardened and stood up to salute. He turned away from John, hoping his friend hadn’t noticed anything, and willed his body into submission. He didn’t need to get a hard-on right now, especially about a woman who had an invisible sign tattooed on her forehead that read Trouble.

Fortunately they were coming into port, so he had responsibilities to keep him busy. He spotted Jeb Varner waiting for them, ready to take charge of the sailboat they’d towed behind them. And probably about to give the two couples a good piece of his mind. The four passengers shook hands with him and with John, thanking them and trying to hide their embarrassment. He was glad enough to hand them over to Jeb.

After that he and John and the rest of the crew were busy with the boat and making their report, so he didn’t have time to think about Miss Sass, which he’d decided was a great name for her. Instead, he looked ahead to what was waiting for him as soon as he changed.

He loved coaching Pop Warner football. It was a perfect way for him to stay connected to the game and use the knowledge he had. He saw in these kids the same enthusiasm for the game he’d had at their age. When a defender blocked a receiver and prevented a catch, he got the same thrill as if he’d done it himself.

“Pigskin practice tonight?” John asked as they walked away from the boat.

“The Strykers?” Chase nodded. “You bet. I look forward to it. Those kids are really coming along.”

“You’re just as in love with the game as you were in high school, aren’t you?”

Chase nodded. “For me that never goes away. I might not be playing anymore, but sharing my knowledge with those kids is almost as satisfying.”

“Not many people can say they were on two championship teams,” John reminded him. “So let me ask you a question.”

Chase quirked an eyebrow. “About the youth league? You looking to get involved?”

“No. Yes.” John shrugged. “I dunno. What I really want to know is if you ever miss it.”

“You know. The game. Playing. The excitement. The crowd.” He chuckled. “The girls throwing themselves all over you.”

Chase forced a smile. The girls had been fun but were never the reason he’d played for the Granite Falls Coyotes. Being on the team that won the state high school championship had given him a sense of worth he’d struggled for since the day his mother walked out. Winning the Division III championship for the Coast Guard Academy had been his next most satisfying moment in life, and had come at a time when his self-esteem was again in shreds. So yeah, football ranked right up there with the Guard. He loved them both.