Give it to Me 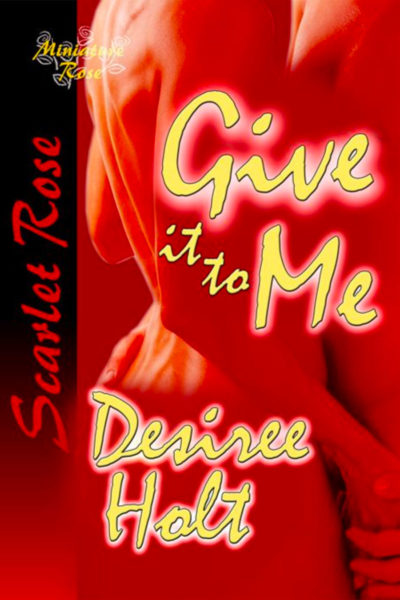 Sam Winthrop threw his keys and wallet on the table, yanked off his tie and added it to the pile, while unbuttoning his shirt. The day had been pure shit. Homicide cases were always messy, even more so when they were the result of a senseless domestic dispute. He’d worked way past end of shift processing the crime scene with the forensics team and questioning the neighbor about what happened. Sam loved his job, but some days the underbelly of society just got to him.

And Susan hadn’t helped one bit. Calling him on his cell to rag at him because he’d broken their dinner date. And calling him at the crime scene, no less. Listening to her razor-sharp voice, it dawned on him what a real bitch she was. He wondered why he’d invested so much time in her. She certainly gave nothing back. And lately the sex hadn’t even been that great. It would be nice to meet a woman who didn’t worry about her hair getting mussed during sex, or who enjoyed some of the raunchy stuff that turned him on. Bring up anything like spanking or playing with his handcuffs and they looked at him as if he’d lost his mind. And fuck them in the ass? Forget it! He never even asked.

Well, lucky him, he had two days off to sit around and feel sorry for himself.

Heading for his bedroom, he stripped off the rest of his clothes, dropped them in a heap on a chair and turned on the shower in the bathroom. The hot water revived his tired muscles and made him feel almost human again. Maybe after a while he’d throw on some clothes and head down to Ray’s. There were always some of the guys hanging out there, looking for a game of pool, or just to hang with and have a beer. And maybe he’d get lucky and a mouthwatering female confection would appear and say, “How about a night of hot raunchy sex?”

Not that he wanted it that way all the time. Sometimes he liked it nice and slow and sweet. But it had to be with the right person. And that right person had to like the other stuff as much as he did.

He turned off the shower and grabbed a towel drying himself, as the sound of the doorbell pierced his water-dampened brain. He scowled. Who the hell could be at his door? For a frightening moment he thought maybe Susan had decided to track him down and chew him out again, then rejected that thought. Too much like trouble on her part.

The bell rang again, more insistently, as if the person was leaning on it.

“All right, all right. Hold your water. I’m coming.”

He wrapped the towel around his waist, padded down the hall and yanked open the door. And stood with his jaw dragging on the floor.

Framed in the doorway was the most tempting confection he’d seen in, well, he couldn’t remember when. Rich brown hair with tawny streaks cascaded down her back in ripples, hazel eyes with gold flecks peered at him from under the thickest eyelashes he’d ever seen, and a bow of a mouth was set off by a peaches and cream complexion.

She was dressed in the shortest silk robe he’d ever seen, barely brushing the tops of her thighs, and unless his eyesight had suddenly gone bad on him, she was completely naked underneath.