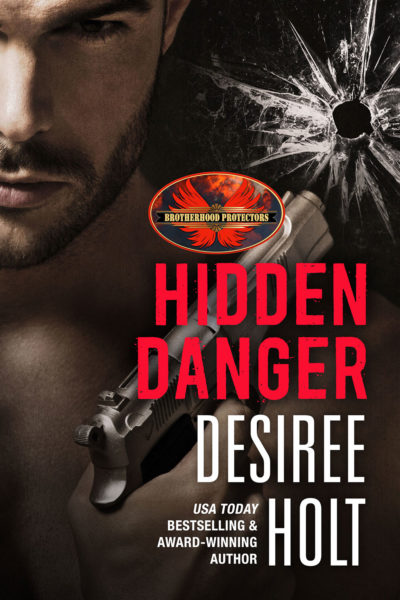 Something is wrong in Alix Bonner’s marriage. Maybe in her life. How can she pick two losers in a row? But her husband’s lack of attention is nothing compared to the shocking graphic she sees on their television screen when she arrives home unexpectedly. Now she has to get away before he knows she’s seen it…and erases her.

Charlie Zalman—otherwise known as Charlie Zero or Zero—is heading home after a long assignment for Brotherhood Protectors. All he wants is a hot shower, a cold beer and a soft bed. He’s still nursing the damage to his arm that got him his medical discharge from the SEALs and chased away the woman he thought loved him. No more women, at least for more than one night. Until he finds Alix Bonner stranded on the highway and frightened out of her mind.

Lee Bonner has built an empire on corrupt business but now it seems to be closing in on him. Someone has snitched to the feds and his wife has seen information never meant for her eyes. She can tighten that noose around her neck if he doesn’t find her.
But he doesn’t know about Brotherhood Protectors, trained former military led by Hank Patterson, who will do anything to save their own. In less than twenty-four hours everyone’s life will change.

All Charlie Zalman, better known as Charlie Zero, wanted to do was go home, take a hot shower, grill a steak, and veg in front of the television. He had just completed a month-long bodyguard job for Brotherhood Protectors, one that had taken every bit of energy to complete. Some people were just more difficult to protect, and, often, they were the ones who needed it the most.

Some days, he longed to be back in the SEAL teams, but then a twinge in his right arm reminded him of the metal pins that would always be part of his body and resulted in the medical discharge that left him a civilian. He’d lost a good friend in that firefight, too, a loss he still struggled with, wondering if he could have done anything different.

But the hospital stay and the end of his SEAL career had been only some of the bad news waiting for him. Someone should have warned him that when the woman you thought was waiting for you said, “I’ll always be here,” she actually meant she’d be there until someone better came along. Someone with a sound body and no bad dreams.

He gave thanks daily, however, for Hank Patterson, the former SEAL he’d gone to high school with who had started the agency and was more than happy to bring him on board. The agency became the entire focus of his life, helping him effectively blot out those things he wanted to forget. If now and then he wished for someone in his bed, he always reminded himself his good right hand was ever faithful.

He had been dreaming of the shower and the steak when he nearly ran into the silver sedan half-on, half-off the road, blocking traffic in one lane.

Casting his eyes heavenward in a Give me strength silent plea, he climbed out of his vehicle, made sure his T-shirt was untucked to cover the gun at the small of his back, and jogged up to the driver’s door of the sedan. The woman sitting behind the wheel might have made his tired cock sit up and say Take me out to play if he wasn’t so fucking tired and she didn’t look like one big mess. Masses of dark hair that looked as if she’d been running her fingers through it surrounded a face with high cheekbones and eyes so brown they reminded him of pools of chocolate. Her full lips were bare of any lipstick, but Charlie didn’t think she needed any. The T-shirt she wore with bling scattered over it probably cost as much as his entire outfit. Which, he thought, wasn’t hard. It also fell softly against small but full breasts that he—

Jesus Christ, Zero. Put your cock away and see what’s going on here. This woman gives every appearance of being in some kind of trouble.

It pissed him off even more because no woman had had that instant effect on him for a long time.

She was sitting with her fingers gripping the steering wheel so hard he could see the whites of her knuckles even through the glass. Either she was oblivious to his presence or ignoring him, so he rapped on the window. She jerked up straight, hard, as if she’d been shot. But she kept her eyes focused straight ahead, so he rapped again, wondering if she could grip that wheel any tighter. What the hell was going in there? Who got that tense over a car breakdown?

“Hello?” He didn’t want to shout and scare her half to death, but he couldn’t figure out why she was ignoring him. “Hey! We need to get your car moved before someone rams into it.”

That got her attention. She turned her head and lowered the window a couple of inches. Crap! Were those tears tracks on her cheeks? He wondered if her skin was normally that pale.

Oh, great. Another idiot. At least this one wasn’t related to someone they owed a favor to.