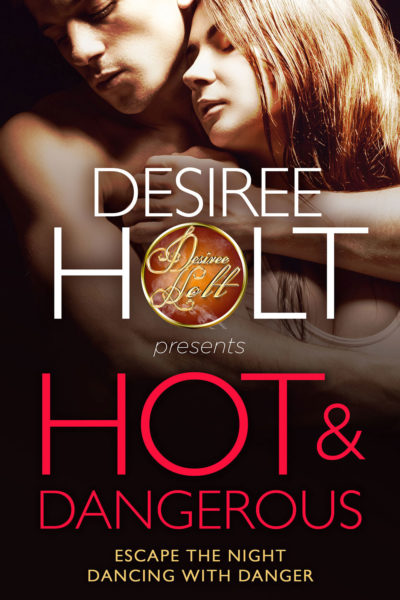 Rachel Windsor knew nothing about Gabriel Peralta except that he was walking sex appeal and blew into her life without notice, here today then gone on a puff of wind. But while he was there he did things to her that even her fantasies hadn’t conjured up, driving her to orgasms that shook her like a raging storm. His mouth knew every inch of her body; the imprint of his intimate kisses lingered long after he disappeared again. Now he’s back again, his life unexpectedly on the line but even in the danger zone his sexual demands were more scorching than ever. Can they survive and find a way to make a life together? Because Rachel is determined not to give up the erotic lifestyle that binds them together.

Note: Both stories have previously been published elsewhere.

From Escape the Night

Anya smiled as Gus turned out the bathroom light, stripped off his boxers and slid into bed beside her. She loved the feel of his big, hard body and the warmth it exuded. She still could hardly believe everything that had happened since that night she’d called him afraid for her life. In the past six months Virgil Branson had been arrested for running a prostitution ring, one that was backed by a major cartel and that sent its women all over the world. Sold them off like a piece of merchandise.

Anya, Stella and Amy had been star witnesses in his trial. Now her friends had been relocated, Virgil was in a federal prison, and she and Gus were building a life together. Something she never could have imagined in her wildest dreams.

Gus slipped an arm beneath her and pulled her toward him. She loved the feel of his body against hers, hard muscles beneath smooth skin. And he always smelled so good—that delicious combination of soap, outdoors and male that was distinctively Gus. Pressing her nose against his shoulder she inhaled deeply, taking his scent inside her.

“I wonder if I’ll ever get enough of touching you?” His voice was already deepening with desire.

“I still have to pinch myself to believe that this is happening,” she told him.

“Oh, I think I should be the one to do the pinching.” He took one nipple between thumb and forefinger and squeezed it lightly.

Heat arrowed straight to her cunt, moisture flooding her and her pulse kicking into overdrive. He could do that to her with just one touch.

Anya ran one hand lightly over the thick hair on his chest, curling her fingertips into it and seeking his nipples. When she scraped gently over the surface of them his breath hissed out slowly.

“Darlin’, you do like to light my fire, don’t you.” He dipped his head to capture the lobe of her ear in his teeth, then trailed his tongue along the column of her neck.

Anya shivered in anticipation. She never would have dreamed that a woman of such sexuality lived beneath her skin. Her experience had been limited and her self-esteem low, especially after Virgil sweet-talked her for the sole purpose of selling her body to the highest bidders.

But from that first night when she’d called him for help, Gus had been caring and protective, coaxing her out of her shyness. He’d taught her that sex with the right person could be wonderful. That most men weren’t like the very few she’d been with, fumbling and inexperienced. Or brutal, like Virgil and his customers. He’d taught her to learn how to respond to the needs of both her body and his. And to welcome his touch.

She’d had to transfer to another office, of course, but luckily there was an opening in one on the same floor. Whenever he stopped by to check on her she wondered if anyone noticed the smoldering glances they exchanged.

Now she rubbed her body against his in a way that fed the pleasure in both of them. Gus moved one hand along her curves with a light, feathery stroke that sent shivers through her.

“You always feel so good to me,” he murmured, his head dipping to capture one nipple between his lips. “Your skin feels like cool silk but there’s such heat beneath it.” He nipped at her jawline. “But that heat’s just for me, right, darlin’?”

“Of course,” she breathed. As if any other man would ever appeal to her.

From Dancing with Danger

While she was searching for a polite way to turn him down a hand touched her shoulder and a familiar voice broke into the conversation and she knew what that edgy feeling tonight had been—her radar working overtime. “Sorry. The lady has other plans.”

Even after all this time, after so many long absences, Gabriel Peralta’s honey-smooth baritone could still make her knees wobble and her pulses pound. She was stunned that he’d showed up at a place like this, an event with so many people. Usually he slipped into her house in the dark of night and left the same way.

Lincoln glared at the man behind Rachel, anger and outrage chasing briefly across his face. “I’m sorry. Have we met? I’m Lincoln Harris. And you are…”

“A close…friend of Rachel’s.” Gabe’s hand tightened on her shoulder. “I’m sure you’ll excuse us. I’m only in town for a short while and we have a lot of catching up to do.”

In a smooth maneuver he slipped her from Lincoln Harris’s arms and into his and began moving them away, his feet catching the rhythm of the music. She glanced over Gabe’s shoulder and caught the controlled anger on Lincoln’s face before he melted back into the crowd. She hoped there wouldn’t be a price to pay.

Rachel realized suddenly he was wearing what she considered an unusual outfit for him. All she’d ever seen him in were jeans and t-shirts, sometimes with a leather jacket if the weather was cool. But tonight he had on an expensively tailored charcoal gray suit, white-on-white shirt with gold cufflinks and a conservative tie. He looked exactly as if he belonged with the invited guests. It added a new dimension to her impressions of him.

With her face pressed to Gabe’s chest, she inhaled his distinctive scent, all male with a hint of the outdoors and something citrusy. She would never tell him that she still had a t-shirt he’d left several months ago that she slept with every night, holding the smell of him close to her.

“I’m impressed with your outfit,” she told him. “Did you have to borrow it?”

His chuckle rumbled against her body. “Believe it or not I actually own real-people clothes.”

“How did you get in here, anyway?” She had committed the extensive list to memory and she knew for sure his name hadn’t been there. “The guest list is completely vetted and our security is top notch.”

He chuckled softly. “Yes, I know that. But I have connections. How long do you have to stay here?” he murmured in her ear.

“The Harrises usually expect me until the bitter end. How long are you here for this time?”

“Two days. Can you leave early?”

The orchestra had segued into another slow, romantic tune and their bodies moved in perfect harmony. He danced with an unexpected grace, the muscles in his thighs flexing as he moved.

She could feel his heart beating where he enfolded her hand against his chest and the thick ridge of his cock pressed against her soft flesh through the fabric of their clothing.

His hand caressed the nape of her neck, sending shivers down her spine and he pressed his cock more tightly against her. “Rachel, I have to see you naked. I’m so hard for you right now I’m doing my best not to lose control here in a public place.”

“I can’t leave,” she protested weakly, although she wanted nothing more than to run out the door with him. “What would I tell my bosses?”

They continued to move in time to the music, his pelvis grinding against hers, the sleek muscles of his thighs flexing with each step. One hand drifted down to cup the cheeks of her ass, pressing the light fabric of her dress into the cleft.

“People can see us.” She tried to reach back and rearrange the dress but he grabbed her hand and pulled it against him, trapping it between their bodies.

“They’re all too busy being seen by other people.” He bent his head so his mouth was close to her ear. “I love your ass. Do you remember the first time I fucked you there, Rachel? How hot it made you feel? How you loved my cock filling your hole? How hard you came?”

If he didn’t stop talking to her she would implode right there on the dance floor.