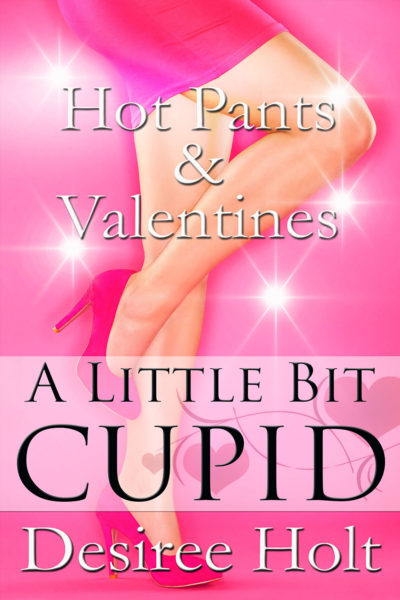 From the A Little Bit Cupid collection

For a year they each regretted the inability to contact each other. Then, next Valentine’s Day, they reconnected in the most unexpected place…

Dax Rutledge stood on the sidewalk, studying the crowds moving past him and debating with himself. It was barely ten o’clock and he was ready to bag it all and go back to his motel room. The entire city seemed to be caught up in Valentine’s Day fever and he thought if he had to look at one more red heart or drawing of Cupid, he might hang himself. Or throw up. It was hard to get in the mood for love when there was only a team of one.

He and Clint Wilder, who’d become like a brother to him since they’d both been assigned to the same SEAL team, had planned to spend the time at some resort, just hanging out. But then Shelley, Clint’s very sweet lady who traveled for a living, had suddenly had the week off. He’d pretty much had a Taken sign hung around his neck since he’d met her. When she’d discovered at the last minute she’d have the week free, there’d been a change in plans and they’d headed to Florida.

She’d insisted he bring Dax with him and promised to hook him up with some of her friends. Maybe he’d even get to have some outrageous sex.

Which was how they’d ended up spending their free week here in Florida. In Tampa, on Hillsborough Bay, of all places. He saw enough water as it was. But Clint had wanted to spend the time with her, and Dax couldn’t blame him. Things seemed to be getting pretty serious with the two of them. If he could make sure Clint and Shelley had the week together, no problem.

Was that a twinge of jealousy poking at him? Hell, no. He only had room for one dedicated relationship at the moment and that was the SEALs. But, he thought, what the hell? He was currently unattached and didn’t have any place else to be. And maybe he’d find someone to hook up with while he was here.

Shelley owned a cute little house in South Tampa that even had two guest rooms. At first Dax had felt uncomfortable staying there with them, but they’d gone out of their way to make him feel at home. He’d bought himself a set of ear plugs so when they went off to bed at night, he wouldn’t accidentally hear anything. The two of them had been great about including Dax in some of their activities and he’d had fun with them. When they went off by themselves, they always used Shelley’s car and left Dax the one he and Clint had rented. He’d managed to amuse himself and now the week was coming to an end. It was Valentine’s Day and Clint and Shelley would definitely be celebrating.

‘You should have waited another week to break up with your latest,’ Clint had reminded him earlier. ‘Then you wouldn’t be the Lone Ranger tonight.’

Maybe so, but Dax had reached the point where Honey—and wasn’t that name just too sickeningly sweet—was making hm itch every time they were together. He was a hard-fighting SEAL, immersed in the heated battles in Afghanistan, who wanted a real woman to spend his time with when he was on leave, not the kewpie dolls he’d thought were all he needed. It was his own fault. He knew that. A woman wiggled her butt at him, he got hard and off they went. But somehow, now, he was bored with that scene.

Maybe he was just getting world-weary. Or older. He was tired of females who knew all the right moves as if they’d memorized them and wanted to be graded on their performance. Why couldn’t he find someone who knew how to be a partner in bed? Who focused more on her partner than herself? Who was… What? Something, but he couldn’t find the words. Apparently because his expectations were too high.

It wasn’t that he expected anything permanent to come out of it, but he also  wanted someone to spend time with whose IQ was bigger than her bra size.

Tonight, they’d all been invited to a Valentine’s party that one of Shelley’s friends was throwing. Dax had packed his duffel and when they’d left Shelley’s house, he’d thrown it in the rental car.

‘You two need privacy your last night together,’ he’d told them.

‘Come on,’ Clint had said. ‘We’re not kicking you out of the house. It’s worked all week, right?’

Dax had nodded but smiled. ‘I just think you don’t need to worry about eavesdroppers your last night in town.’

Shelley had actually blushed but thanked him for his consideration.

They’d gone to the party together, but Clint and Shelley had begged off early, leaving to pay homage to the great god Cupid, and he’d sent them off with his blessing. The party had been okay at first and he’d had a decent time. But none of the women at the party had appealed to either his dick or his head. Maybe he was getting jaded. He’d lasted as long as he could then finally made his excuses and taken off.

Now, here he was, standing in front of a waterside bar in Tampa, Florida, wondering what to do with himself. For whatever reason, he wasn’t too excited about finding a woman to spend the night with. Maybe a drink will help, he thought, as he pushed through the doors into Pat’s Pub. How cute. Not.

The place was over-decorated with every Valentine adornment one could think of and the crowd, jammed in elbow to elbow, was doing its best to celebrate loudly. He managed to work his way through the room without getting stabbed in the nuts and found a place at one end of the bar to stuff himself into.

“Thanks,” he told the man next to him who moved over a fraction of an inch to give hm a little room.

“Yeah, sure. Just don’t try to take a full breath.”

They had to shout to be heard over the noise of the crowd. What the hell was he doing here, anyway? He leaned forward on the bar, trying to signal the bartender, and suddenly a body pressed into his other side and the scent of fresh flowers drifted past his nose. Flowers? Here? Really? He turned his head to the left and his eyes nearly fell out.

Next to him was a woman in the fullest sense of the word. Rich auburn hair hung in an array of curls, framing a heart-shaped face and emerald green eyes. Black shorts in some kind of fancy material with red hearts on cupped her ass and made him want to do the same with his hands. A bright red T-shirt with a low neck draped over breasts he had a sudden itch to squeeze. He had to stop himself from curving his fingers.

And just like that his plans to spend the night without hooking up went out of the window. He managed to squeeze a little closer and get a better whiff of whatever scent she was wearing. Of course, it sent a message straight to his balls and his dick tried to push its way out of his fly.

He’d bet a month’s pay she wasn’t named Honey or Bunny or Tootsie, and that in bed she took her partner to the moon and back. What he couldn’t understand was why she was in here alone, just like he was. Unless she, too, was tired of idiots.

He couldn’t resist speaking to her, so before he could stop himself, he tapped her on the shoulder.

“I see you’re dressed for Valentine’s Day.” He had to raise his voice a little to be heard. “Who are you here celebrating with and where is he or she?”

She glanced sideways at him. “I’m celebrating with me, myself and I, and right now I like it that way.”

She turned away from him. He could have left it at that, but she intrigued him, and it had been a long time since that had happened. He moved his head closer to hers so he didn’t have to shout quite so loud and advertise his intentions to an audience, although he was pretty sure no one outside their little circle of two would be able to hear him.

“If you’re alone, maybe you’d let me buy you a drink.” As loud as he had to speak, he still didn’t think the people celebrating heard him. They were making too much noise themselves.