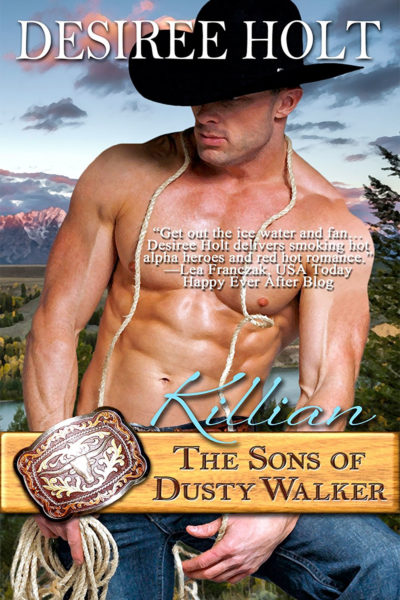 To say Killian Walker was shocked when he discovered that not only was his father not married to his mother, but he had three half-brothers in the same situation. Facing each other for the first time at the reading of Dusty Walker’s will, the atmosphere could best be described as hostile. The terms of the will didn’t help matters. Spending a week in Red Creek, Kansas in Dusty’s house and Dusty’s business was just not on his agenda of things to do. But if he wanted the money to start his own ranch, he’d have to grit his teeth and man up.

Lexie Choate had big dreams about success in the world of art. Her teachers at Savannah School of Art praised her talent and told her she was a shoo-in to win the prize of a gallery show of her own. The last thing she expected was for the man who stole her heart to also steal the prize from her. She ran back to Red Creek, to heal her broken heart and recover from her disappointment. As the owner of Heart Starter, the popular coffee shop in town, she was busy building a new life for herself, while she continued to paint in secret. Hope never dies.

When Killian walked into Heart Starter the chemistry between the two of them was instant and explosive, but neither of them was looking for anything long term. She wanted to get back into the world of art. He was planning to build his ranch and not in Nowhere, Kansas. One week, they agreed. One week to enjoy each other, then goodbye. Funny thing, though, just when you think you’ve got everything planned out, life has a fanny way of turning your life upside down.

He had made it to the end of the block, in front of Heart Starter. Was her coffee like battery acid, or just strong with a rich flavor? Whatever, he needed something to clear his brain, so he pushed the door open and walked in. A bell tinkled overhead.

“Be right with you,” a voice called.

Killian stopped in his tracks. The voice had the lyrical quality of an angel’s, plucking at his heartstrings as well as other parts of his body. When she rushed out from the back of the shop and he caught sight of her, he was sure he’d need some of the strongest coffee, because his heart stopped. Just. Stopped.

Lexie Choate was his actual dream come true, the best package Killian had ever seen. Holy shit! The top of her head just came to below his shoulder, a head full of streaky blonde curls. Gold-flecked hazel eyes surveyed him from beneath a fringe of thick lashes sweeping over creamy cheeks with a light dusting of freckles. She was busily tying a clean apron over a pink T-shirt and skinny jeans and smiling an apology to him with plump, kissable lips.

What the fuck, Killian? First of all, he wasn’t here in this bumfuck town to have fun. Secondly, with the damnable truth about Dusty and the whole situation, was he even good relationship material anymore? What kind of genes did he carry, anyway? Could he be faithful to one woman? He needed to get his head out of his ass before it got permanently stuck there.

Yeah? The little voice in his head remarked. He should tell that to his cock which was suddenly begging to be let loose to have fun.

“Sorry.” Her voice danced over his skin like a teasing wind. “I got a little tied up in the back.”

At the words “tied up,” Killian’s fingers curled up over his absent length of rope. A picture burst into his mind of the very tasty barista naked except for his rope tied around her in an intricate pattern.