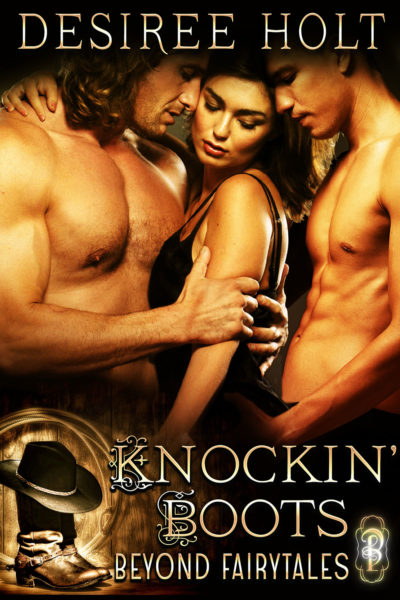 A Beyond Fairytales adaptation of The Brothers Grimm’s: The Boots of Buffalo Leather

For years, Dan and Kylie Franklin have searched for someone who can fill in all the missing blanks in their situation. When fate brings Clint Gorman into their lives, the instant attraction runs hot and deep. After a night of intense, sweaty sex, there’s no doubt he’s the one for them. But when Clint’s past comes to light, they’re forced to decide whether or not the connection they felt is enough to keep the three of them together.

“So.” Kylie waited while Dan dropped onto the extra-long couch then sat on his lap and turned to face Clint. “Dan said you were traveling the country and happened to stop in Whistling Creek.”

“That’s right. He was kind enough to invite me to lunch, and it seems we hit it off.” To his total shocked surprise.

“No definite destination in mind?” she asked.

“Uh-uh.” He paused to take a long swallow of beer. “Wherever the bike takes me.”

“I’ll bet you’re enjoying it. Doesn’t he look like it, honey?” She glanced at Dan, who was stroking her bare shoulder and arm.

“Sure does.” He brushed her hair aside to trail kisses down her slender neck and bit gently at the place where it joined her shoulder. Clint saw a little tremor skate over the woman’s skin. “But I got a feeling he might have a better time here with us. At least for a little while.”

She shifted her gaze to Clint again. “I’m assuming Dan explained our situation to you?”

“He did. And I sure can understand it. Some things are difficult for people to accept.”

“In case you think we’re nuts, putting it out there like that,” Kylie told him, “Dan’s very good at reading people. He’s had to be, over the years, as we try to find a third for our, let’s say, social activities. We made a few mistakes early on, so we’ve learned to be extra careful.”

“And to trust our instincts,” Dan added. “I got a very good feeling about you from the moment we shook hands.”

Clint took another swallow of beer, letting the chilled liquid slide down his throat and hopefully cool his body that seemed to be heating up again very quickly.

“I’d just as soon let the two of you take the lead. But I’m not shy about asking if something pops into my head.”

“I don’t know if Dan mentioned it, but I do have a secret wish.” Kylie looked at Dan, who nodded. “We would love to find someone to move in with us permanently. Of course, that would be asking an awful lot.”

“Yeah?” Clint tried not to show his surprise. He’d been in a lot of one-night ménages. Sometimes even two-night encounters. But a permanent one? Would that ever interest him? He gave the other man a questioning look. “And you’d be okay sharing your wife on a regular basis?”

Dan drained the last of his beer and set the empty on the little table beside the couch. “Hell, yes. I mean, I know there would be a lot of logistics and specifics to work out, but if we could find someone on our wavelength, someone we both wanted to include, that would be the ideal.”

“But that’s just a dream, you know?” Kylie leaned into her husband. “Today, let’s enjoy each other. I’m more than ready”

“Sounds good to me.” Yeah, he was more than damn ready, too. 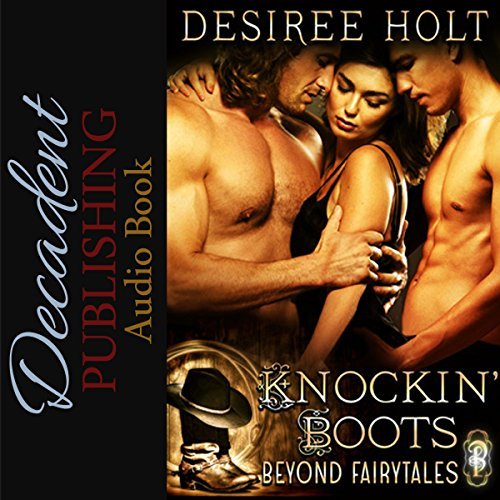