Lexie and Killian: The Sons of Dusty Walker 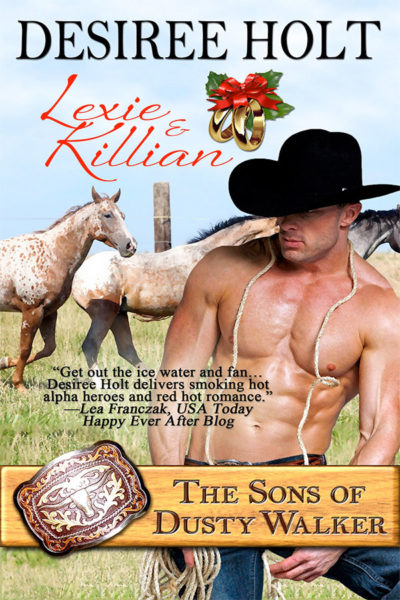 Lexie Choate and Killian Walker are still floating on a cloud of newly wedded bliss. Little did Killian know that an inheritance from his father would lead him to the love of his life. Now he’s living in Red Creek, Kansas, a place he’d never heard of before, and building up the stock on his newly established Appaloosa breeding ranch and enjoying every minute of every day with the love of his life. After a disastrous romance that ended her artistic career, Lexie had never thought to find real love again. Of course she hadn’t been prepared for Killian to walk into her safe little coffee shop, either. Now she’s wrapped up in wedded bliss and painting every spare moment she has. For the two of them, life could not possibly be better.

Until Killian convinces Lexie to enter some of her pieces in the County Art Fair. Not only does she take first place but she is also approached by a gallery owner from Savannah who happens to be visiting about doing a small one woman show. She’s nervous. After all, Savannah was the place where her life had fallen apart. But Killian, proud of his wife’s talent, encourages her and so with some trepidation she moves forward. Neither of them is prepared for how badly it will impact on their lives. With Christmas approaching, will they be celebrating the holiday together…or apart?

On the ride back to the ranch, the atmosphere in the SUV vibrated with tension. Killian realized what people meant when they talked about a silence so thick you could touch it. Unable to stand it any longer, he said, “Okay, I agree. It was my fault. I was stupid to let this happen.”

He sensed Lexie shift beside him.

“You think I’m mad at you?” Her voice shook with outrage.

“Lord, no. I’m mad at Dylan for wanting to do it and at Zoe for blaming you. Maybe it was a stupid idea, and we’ll get to that later. But, Killian, these are grown men. No one held a gun to their heads.”

“They’ll get over it,” he assured her, relieved not to be in the center of the hot seat. But it did bother him he might have upset Lexie, who he loved beyond anything. And yeah, he’d been stupid even bringing up the horses today, but he’d be a lot more careful after this.

“I hate for there to be friction between you and your brothers,” she told him. “You’ve all just found each other and figured out how to be a family. I don’t want anything to disturb that.”

“It won’t,” he promised. “I think between the fishing and the horses we’ve decided to stay away from those kinds of group activities for a while.” He lifted her hand and kissed her knuckles. “I’m more interested in what’s going on with you.”

“With me? You know what’s going on with me. What do you mean?”

“I saw the envelope from the Savannah Art Show Committee. It was lying on the counter. Unopened.” He glanced at her, but in the dark he couldn’t see the expression on her face.

“So you saw it.” Her voice held a defensive edge. “So what?”

“Are you planning to enter?” He tried to keep his voice as calm and even as he could because he had mixed feelings about this. Savannah had been the scene of not just her opportunity for success but also of a spectacular humiliation. And factored into it was the jackass she’d thought herself in love with at the time. “Lexie?” he prompted, when she didn’t answer.

“I’m thinking about it,” she answered.

He still remembered how shocked he’d been when he learned she painted all the artwork hanging on the walls at Heart Starter. Not to mention the incredible portrait of him now hanging in their family room. He was so damn proud of her, and so pissed off at the jerk who’d stolen her chance from her. He wanted her to have this opportunity, even if it came to nothing. At least it would mean she’d moved past that disaster, and he wanted that for her with everything he was.

“But you contacted them about an entry, right? Isn’t that why they wrote to you?”

“I, uh, asked for a place in the show.” She paused. “There are a limited number of entries, like always. I thought…”

“Thought what?” he pressed, sliding a quick glance at her and seeing her small shrug. “That you might not get accepted?”

“Well, you know,” she murmured. “It’s been almost three years since I went to art school in Savannah and left all that behind.”

“But you’re still painting,” he reminded her.

“For myself,” she told him. “And you. And my friends. That’s all. Killian, I was already older than many of the students when I went there. For all I know, the newest crop of young geniuses has already passed me by.”

“I don’t believe that. Besides, I’m for sure no judge, but your painting has a maturity I bet most of the others lack.”

“Thank you. You’re the best husband.” She reached across the console and squeezed his thigh.

Even a gesture that light made his cock leap to life and beg for attention. He needed to get home in a hurry.

“I say that not just because you are my wonderful wife but because your talent is so obvious. Lexie, you can’t let what happened the last time affect what you do for the rest of your life. You love painting. Why not take a shot here? If you don’t get in, or don’t win the prize, you’re still going to keep painting. And more people will see your work and want to buy it.”

She giggled. “Maybe you could take out an ad that says that in great big letters.”

“If it would make you happy.” He put his large hand over hers. “Right now, what would make me happy is to get you home and naked as fast as I can, and forget about today’s disaster.”

“Sounds good to me.”