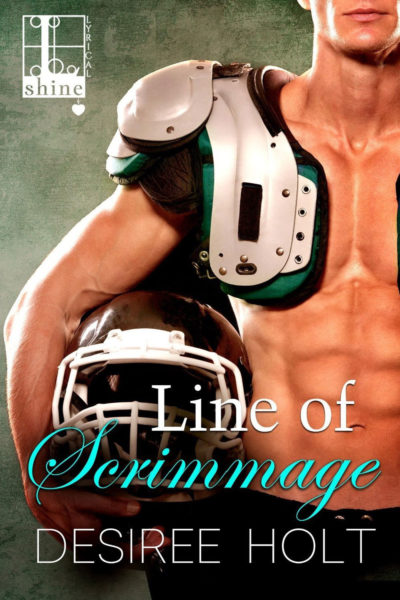 Sometimes it’s not about winning…

One bad tackle. That’s all it took to put wide receiver Jake Russell in a cast for the rest of the NFL season. From being a high school all-star to getting drafted by the Austin Mustangs, football has been Jake’s life for as long as he can remember. It’s what defines him—because he has a secret he never shares. But now that he’s laid up in bed with a nurse displaying a lot of distracting bedside manners, he’s discovering life on the sidelines might have its perks…

One last paycheck. That’s all Erin Bass has left to her name when the resort she works at shuts down. Desperate, she agrees to be a caregiver to hardass jock Jake Russell, who also happens to be a memorable one-night stand. Before long, caring leads to daring new ways to catch up in bed, especially with Jake still in a cast. But with football on the sidelines, this time the game is serious…

“I heard you.” He scowled. “So you’re gonna run scared the first time I tell you to scram? You’re really planning to leave me here like this? Helpless?”

“What’s the matter with you?” she demanded, her anger boiling over. “First you tell me to go away, and then you get mad because I said fine. You know as well as I do this is an impossible situation. Damn it.” She clenched her fists tighter. “Your home care person will be here in two hours. I’ll stay until I get hold of Ivy and get her back here. She’s just going to have to make other arrangements. I’ll tell her that and make sure she understands.”

“Yes, tell her.” He scrubbed a hand over his face. “What the fuck was she thinking, anyway? Do you think I want a woman taking care of me who practically threw me out of her place? Or maybe you just can’t put your personal feelings aside to do the job you were hired for.”

“I was hired to take care of Russ Jacobs.” She did her best to keep her tone even. “That’s not you, so I’m out of here. Ivy can just get you someone else.”

She turned to walk out of the room, fighting to keep herself under control.

“Chicken,” he called after her.

“What did you just say?”

She turned around, anger seething through her. “I am a lot of things, but chicken is not one of them. How dare you?”

“How dare I?” He made a sound that was part laugh, part grunt of pain. “What else would you call a woman who’s so afraid of a relationship she pushes the other person away before it even gets started?”

“Pushes away? Relationship? Are you referring to the little sexual fandango we engaged it?”

“Wow! Sexual fandango? Fancy words for someone who’s a chicken.”

“Stop saying that.” She had the irrational urge to stamp her foot. “I just let you out of a situation you would have walked away from anyway.”

“Is that right?” The pain meds were obviously kicking in, because his face had color to it and the lines around his mouth had softened. “How did you ever get such a low opinion of me, anyway? You hardly even know me.”

“I know your type, though. I’ve seen how men like you behave.”

I’ve had experience up close and personal, too.

Anger flashed in his eyes. “Men like me? What the hell is that supposed to mean?”

Erin bit down on her lip, forcing back the immediate retort. This man was injured and in pain. This was no time to pick a fight with him, even though she was itching to, as obnoxious as he was behaving.

“I’m going to try to reach Ivy. Would you like something besides coffee first? Your sister did say you like juice in the morning.” She managed to ask the question in her most politely impersonal voice. “Or would you prefer to wait until after you’ve had your shower?”

“That’s it?” Each word was underscored with irritation. “You’re not going to answer my question?”

“I’ll take that as a no.” She turned and headed out of the room. “I guess that’s a no on the juice, too. I’m going to call Ivy and tell her she needs to make other arrangements.”

“Yeah. Fine. Okay. You do that.” When she didn’t say anything he shouted, “I agree with you. This was a huge mistake. I can call a million women who’d maybe even pay me to do this. You hear me?”

“Go ahead. Pick one. Any one. Find one who’d put up with your sweet personality.”

“Talk about sweet personalities. Have you looked at yours lately?”

Erin kept on walking, even as Jake continued to shout from his bed.