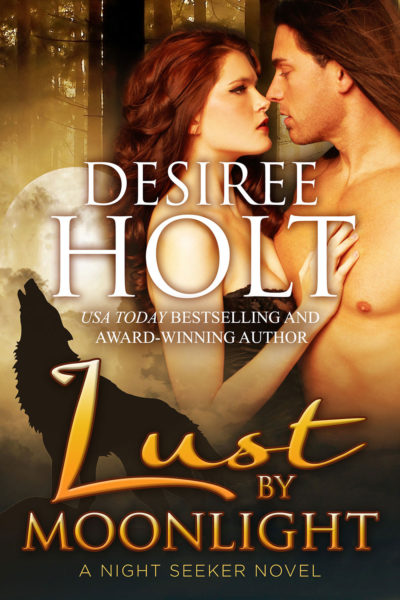 Chloe Hansen is searching for her friend who she’s convinced is a victim of the devil beast. When she meets Mark she feels a primal tug that tells her they are meant to be together. As the join forces in the hunt, they soon learn that sex between them feeds a need, rather than slaking it. The multiple orgasms barely satisfy their lust for each other, and as they draw closer to their prey they mate in the fiercest coupling yet.

Mark paused at the top of a rocky knoll, lifting his snout. A strange scent caught at his nostrils, and he turned his head.

Every muscle in his body went rigid. Wolves were not endemic to Zapata County. Indeed, wolves were all but extinct everywhere in Texas, disappearing slowly over the years. While neighboring states had reintroduced the gray wolf to the wild, Texas still lagged behind. Which was why Mark always was careful when running, to do it at night and pick a spot without human habitat.

So where did this other wolf come from? Was it one of the rare red wolves he’d read about inhabiting the area? He didn’t even know if their existence here was a fact, or just a legend like El Chupacabra. And why would it be here, anyway, since its environment was the marshland between Houston and Beaumont?

Moving rapidly into a small cluster of trees, he shifted and used the thickest tree to conceal himself. Peering around the trunk, he spotted the other wolf still standing in the same place. It turned its head in Mark’s direction and he could have sworn that even at this distance the animal saw him. He held his breath. If it was truly a wolf in the wild, it would smell him and possibly attack.

But the strangest thing happened. The air around the animal shimmered and in seconds, where the wolf had stood, was a woman whose amazing body was outlined by the moonlight. He could tell she was tall, with long hair of some dark color that streamed down her back, and as she lifted her arms the movement brought her magnificent breasts into relief.

His cock stood immediately at attention, hardening and swelling. He started to move out of his hiding place, then thought better of it. She turned her head in his direction for the briefest of moments, then the air shimmered again and the wolf was back.

He stood unmoving, watching, until the other animal loped off into a stand of trees and disappeared from sight. This was not good. If there was another shifter in the area, Night Seekers really needed to know about it. He’d have to do some real digging to find out about the wolf, and do it without raising any suspicions.

Taking one last look, he turned and trotted off to his house.

If she hadn’t seen it herself, she wouldn’t have believed it. This was the last place she’d ever expected to encounter one. Chloe Hanson stood for a moment when she was her wolf again, took one look back toward the trees and loped down from the rocky outcropping. Then she stopped, holding herself still while she scented the air. The aroma of the other wolf was fading, drifting away on the breeze. Then it was gone. The very last thing she’d expected, practically in her own backyard, was another wolf. And a shifter at that. Not only were wolves not indigenous to Texas, they’d been extinct for a long while and Texas Parks and Wildlife had yet to join New Mexico and Arizona in reintroducing the wolf into the area.

That meant she had to be very careful when and where she ran. Of course, the same applied to the other shifter. He couldn’t be from anywhere around here. She was sure she’d have known about him by now. Shifters were rare around South Texas, but they all had an uncanny ability to sense each other.

Of course, Zapata County was so sparsely populated there were vast stretches of land where you saw nothing but animals like the white tail deer, feral hogs and javelinas. No wolves, so if one was spotted, there would be talk. And there hadn’t been any. The emptiness of the landscape gave her a sense of privacy and security. Just one of the reasons she’d chosen to move here after…after Melinda.

The other was that this was where Melinda, her best friend since childhood, had disappeared. Just snap! like that. One minute she was taking a late night swim in the pool at their motel. The next she was gone. Chloe had heard a scream and raced outside, but in that few seconds, her friend had disappeared completely.

For three days, people had searched for Melinda. The sheriff, his deputy and volunteers had combed every inch of Zapata County. The sheriff had personally contacted his counterparts in the neighboring counties and sent out notices throughout Texas.

“It’s possible that for whatever reason, she just decided to hightail it out of here,” Sheriff Torres had pointed out.

Chloe hadn’t been able to make him understand that Melinda would never do anything like that. She knew something they didn’t. Like herself, Melinda was a shifter. It was one of the things that bound them together so strongly and a major reason why Melinda would never be that irresponsible. And deep down, where she didn’t even want to think about it, was the possibility her friend had been taken by El Chupacabra. Maybe—the thought gave her shivers—to try to mate with her. Chloe had heard and read all the frightening, disgusting legends about the devil beast, but unlike many others, she was convinced it was true. And like some, she harbored the suspicion that it was also a type of shifter, part human and possibly looking for a mate. Killing its prey if mating was impossible.

If she couldn’t find Melinda alive, at the very least, she wanted to find her body and put her soul to rest.

But this wasn’t exactly something she could share with humans.