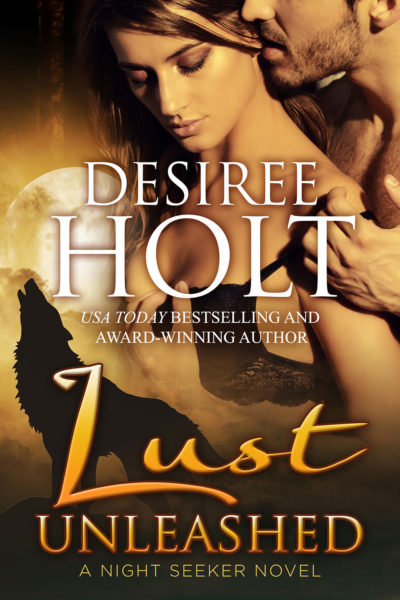 Jonah Grey is driven by a lust for the blood of the legendary Chupacabra who murdered the woman he was to mate with in a horrendous manner. He jumps at the offer to leave the FBI and join Night Seekers, a group of people dedicated to hunting and killing the devil beast. When a new killing is reported, Jonah is assigned to investigate. Following a track late one night, Jonah encounters comes upon a cabin where a woman lives alone. Through the window he sees her pleasuring herself and both his wolf and human senses are fully aroused. When he goes to question her there is such explosive chemistry between them that neither can turn away from it, and the sex that follows brings them to a level of pleasure neither has ever known before. He moves into her cabin dividing his time between tracking the Chupacabra and erotic bouts of orgasmic sex with Dakota. They form a bond that goes beyond the hot tumble in the sheets. She is even accepting of him when she sees him in his wolf form. But will she agree to mate with him and accept him full into her life? Is the beast they track and kill the real Chupacabra…or a fake, leaving the real beast to search for yet another prey?

Note: This title has previously been published elsewhere.

Jonah definitely was cautious. He’d parked his SUV in a carefully scouted hiding place not far from the first preserve, stripped and left his clothes inside. A magnetic box clipped a spare key to the underside of the vehicle in a place where he could easily retrieve it. Then, as the wolf, he’d set out, using his keen eyesight to search for hidden enemies, always scenting the wind for humans as well as his prey.

He’d gone about another mile when he saw it. Cresting a small rocky hill, he saw a narrow stream gurgling below and a shallow layer of rocks leading up to a cabin sitting at the end of a scrabbly dirt road. Ranchers would call it a line shack. Just a square block sitting out here in the middle of godawful noplace. A narrow porch ran along the front of the cabin and light shone through one window.

Who the hell would live way out here if they didn’t have to?

But at least they weren’t totally cut off from civilization. A small pickup truck sat beneath a lean-to next to a generator, and a satellite dish on the roof was silhouetted against the night sky. Whoever it was still communicated with the rest of the world.

Jonah sat back on his haunches and sniffed the air. The scent of the Chupacabra had been fading and now it had all but disappeared. There wasn’t even a faint sound in the air except the distant wail of coyotes. Where had the animal gone to? Surely not in the cabin. Nothing the team had learned indicated it either had human qualities or lived with a human. Of course, anything was possible.

As he watched, the door to the cabin opened and a woman stepped out onto the porch. Behind her the low light in the room outlined her figure. His wolf eyesight noted she was of medium height, with long hair that hung down her back and the hint of curves in the jeans and t-shirt she wore. Jonah licked his lips, salivating as he tried to imagine her naked.

Cool it, you asshole. You’re here on business, not to ease the ache in your balls.

Then he noticed the shotgun cradled in her arms. All right, then. No fooling around here. Had she heard something? Not him. He was moving so silently he barely heard himself. The Chupacabra? If he was there he was masking his scent really well. He lowered himself to the ground, invisible in the short undergrowth surrounding him, rested his head on his paws and watched.

The woman walked back and forth from one end of the porch to the other, peering out into the darkness. Finally she turned and went back into the house.

Jonah waited until he was pretty sure she had settled down to whatever she’d been doing, then moved noiselessly along the ground until he was four or five feet from the building. She had not drawn the blinds, no doubt thinking there was no one out here who could invade her privacy.

Using every bit of stealth he could command, Jonah worked his way close to the cabin and rose to peer in the side window. If there was an animal of any kind in there he didn’t see it. Just one large room with a worn but polished wooden floor, hand-braided rugs and comfortable furniture. The woman sat in the one armchair, staring at the door, shotgun still cradled in her arms.

He could see her more clearly now. Her hair was a rich brown with reddish highlights that glinted in the light from the lamp beside her chair, tumbling down her back in thick waves. In profile he could see the classic line of her face and the way the soft fabric of her t-shirt draped over lush, full breasts. Jonah wished he could see her eyes. Were they brown or some unique color brunettes often had?

She sat rigidly in the chair, gaze fixed on the spot where he figured the front door would be. He was sure she couldn’t hear him. Was it other animals she was listening for? Or a human predators.

What the hell was she doing way out here by herself? He wondered if there was a husband or a lover or anyone who lived here with her. Who just happened to be away at the moment?

Jonah backed away from the cabin and lowered himself to the ground beneath two huge, ancient oak trees. From his vantage point he could see both the cabin and the surrounding area. His ears were alert to pick up any sound unusual to the night. He lay there for a long time, watchful, waiting. He knew he should scout the area but he couldn’t tear himself away from the sight of the woman,

Finally she rose from the chair, obviously satisfied that whatever had alerted her before was a mistake on her part. Setting the shotgun on the table, she began to remove her clothes. Getting ready for bed, Jonah assumed. What else did she do out here with no television and no evident companionship?