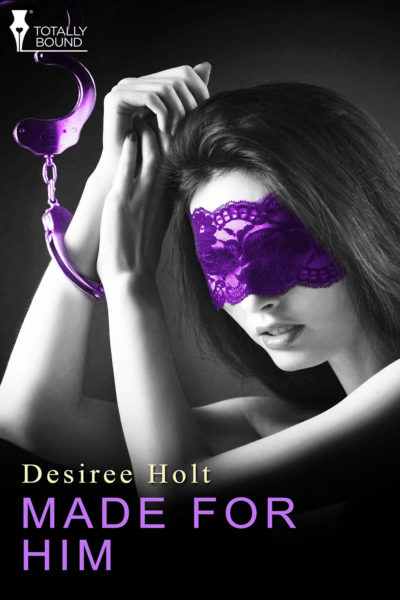 She had one weekend to convince him she was made for him.

Micah Sheridan is a self-made billionaire who has the world at his fingertips. He can have any woman he wants but they all seem to leave him unfulfilled.

What he really wants is a woman who can submit to him completely in the bedroom but who is a strong person out in the world. An equal match for him.

Enter Teri Choate who heads an executive search agency. She’s searching, too—for a man who can master her in bed yet allow her strong personality to flourish beyond the bedroom door.

She has one weekend to prove to him she can be the perfect submissive in the bedroom and an equal beyond the bedroom doors.

In short, a woman who is made for him.

Reader Advisory: This story has been previously released as part of the “Bound to the Billionaire” anthology by Totally Bound.

I’m not making a mistake. This is the chance of a lifetime. Everything will be fine.

Teri Choate locked her fingers together in her lap, watching through the helicopter window as the Friday afternoon sun lit the waters of the Atlantic Ocean below her. A representative of Micah Sheridan’s had arrived at her condo in San Antonio at noon to take her to the private airstrip where the Sheridan Worldwide helo awaited her. Now, as they got closer and closer to his private island off the coast of Maine, as the weekend loomed before her, she forced back the case of nerves that kept trying to take over her body. This weekend was a test, for both her and Micah Sheridan. He wanted to push her, to see if she could fully match his needs as a Dom. What would he ask her to do that would show him she trusted him completely?

She wanted desperately to unlock his heart, because she’d had the misfortune to fall in love with the man and that was a disaster in the making. Could she submit to him as completely as he demanded, no matter what level he took her to? And could he finally unlock the shackles he kept around his emotions to make their relationship emotional as well as physical? Commit to something long term?

She had struggled for so long with the clash between her submissive nature and her strong personality. It had been a big step for her, even before she’d met Micah, to blend those two parts of her. Two sides of the same coin. The result had been some less than satisfactory relationships, leaving her to constrain her sexual activities to impersonal sessions at The Castle, the private bondage club she belonged to. It never ceased to amaze her that while she ran an executive employment agency that served clients everywhere, making decisions that involved power and money, once she took off her clothes she turned into someone else. She was sure that was the reason she’d never been able to build a lasting relationship.

Until Micah Sheridan. The man she knew could take control without controlling her.

At thirty-eight he had amassed a global fortune and was both respected and feared in business communities all over the world. The world saw him as a man in elegantly tailored clothing with a sharp business mind and a ruthless attitude, yet still playing with all the toys a man of his wealth accumulated.

She’d done her homework on him. She was aware that this home she was on her way to was only one of many. He had a villa in Cannes, one in Acapulco, a condo in Hong Kong and a chalet in Switzerland. He raced cars for fun, skied both the Alps and the Andes, kept fully outfitted yachts at each of his villas, and never carried a suitcase because every one of his homes was outfitted with his needs.