Man of My Heart 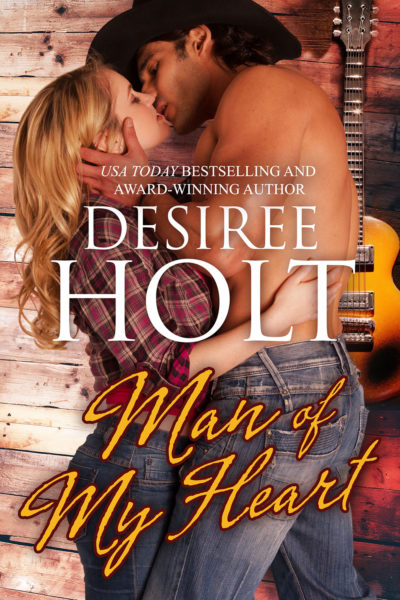 Jasmine Grey is an up and coming country rock star, just completing a successful tour opening for a top country rock group. If only her bass player, Cobra, would leave her alone. When he attacks her the last night of the tour she is so shaken she retreats from everything and buys a home in the Texas Hill Country. She is still spooked, however, by memories of Cobra and his vows of vengeance. Her cousin, Libby McCoy, Aron’s wife, insists she needs protection. Enter Caleb Branam, former Delta Force now an agent for The Omega Team.

Caleb took himself off the active roster after a hostage rescue went wrong and members of his team were killed, but Aron manages to persuade him to take on the job of Jasmine’s bodyguard. As the days go by and she is writing music for her new album, the attraction between them grows more and more intense. When she returns to the road and Cobra begins his campaign of harassment, it will be up to Caleb to stop it for good and for both of them to realize what they feel for each other is the real deal. But will they be able to?

Caleb grumbled to himself as he drove down the two-lane country highway toward the address Carson Wagner had given him. He still couldn’t figure out how this happened so fast. Or how it even happened at all. One minute, he was happily miserable in his self-imposed isolation. He’d even learned to live without sex except for the occasional connection with his hand. The next, Aron McCoy had turned his life upside down. He’d thought it the fickle finger of fate they bumped into each other in Kerrville and nothing would do but they have coffee together. As if that wasn’t bad enough, Aron had managed to connect with him again on the one day he came into town to pick up stuff at the hardware store.

He’d been happy not having to talk to people. Be with people. He could wallow in his misery up in his isolated cabin and feel as sorry for himself as he wanted to. But that damn Aron had trekked up to his cabin, banged on his door, and told him to get himself cleaned up, he had a job for him. He should have flat out told the man no when the subject came up, but the man just wouldn’t take that for an answer anyway. He’d said yes to shut him up and get rid of him. He figured he could take the meeting, tell them he’d consider it, go home, call Aron, and tell him not no, but hell, no, and gone back to his misery.

So then how the hell did he find himself on this road driving to some rock star’s home?

A female rock star. He grunted. Okay, not a rock star. A country rock singer. What the fuck was the difference? He’d handled bodyguard detail for a couple of them while still on The Omega Team, and he hadn’t thought they were all that. One of them hadn’t been too bad, but the other was a real pain in his ass. Conceited, demanding, overdone on the makeup and lacking in the brains department. If this Jasmine Grey turned out to be like the latter, he’d be out of there so fast, his tires would be smoking.

“Take the next left and go one point four miles.”

The voice of his GPS had been giving him directions since he left the cabin, although he’d realized he hadn’t needed them. At least not much. His destination lay about five miles from where he lived.

The turn was just past where the road crossed over the Guadalupe River and took him along a narrow, winding road up, up, and up. He’d wondered what was way back here, and now he knew. Large plots of land with gorgeous homes, some large, some small. No sidewalks and— Wait! Someone riding a horse along the road?

Two more turns and he was at his destination—a big white house set way back from the road, with windows and a long porch across the front. As he followed the upper curve of the driveway, he looked out across the vista and saw the porch had a view covering miles of scenery, including the two giant hills called the Twin Sisters. He came to a stop in the parking area just to the right of the garage entrance. Aron’s truck was already there. Good. He’d promised to be there and he’d kept his word. No way did Caleb want to walk into this thing cold.

He climbed the porch steps, glad there were only three of them since his leg still didn’t work properly on stairs. He lifted a hand to ring the doorbell next to a double door, but Aron was already there, opening the door for him.

“Glad to see you made it, Ace.” He grinned and held out his hand.

“It’s not like you gave me a lot of choice,” he grumbled. The man had threatened to hogtie him and haul him bodily out of his cabin.

“Could you manage to get that scowl off your face before I introduce you to the client?”

“You will.” Aron grinned at him. “Come on inside.”

Caleb let his friend haul him into the house. He stepped into a huge room, like a family room, with living room, dining room, and kitchen all in one big space. Sunlight from the many windows cast a warm glow on the hardwood floor. But it wasn’t the room that made the big impression on him. It was the woman who came out from behind the island counter setting off the kitchen.

Sucker punched didn’t come close to how he felt.

He faced no snotty Miss Glitz. Quite the opposite. He guessed her to be about five foot eight, with auburn hair the color of fall leaves tied back in a neat ponytail. She wore not a stitch of makeup except something slick on her full lips, but, with her forest-green eyes, insanely thick lashes, and peaches-and-cream complexion, she didn’t need any. At least to his way of thinking.

Her simple green T-shirt fell just right across the slope of her breasts, and her jeans clung to her hips and long legs.

For the first time in more months than he cared to count, Caleb felt a stirring in his cock, a tingle in his balls. More than a year had passed since a woman appealed to him on any level. Now his body was going to get him into trouble when he least needed it to. He wanted to run his tongue over those full lips, maybe bite the lower one a little and swallow her tiny moan of pain.