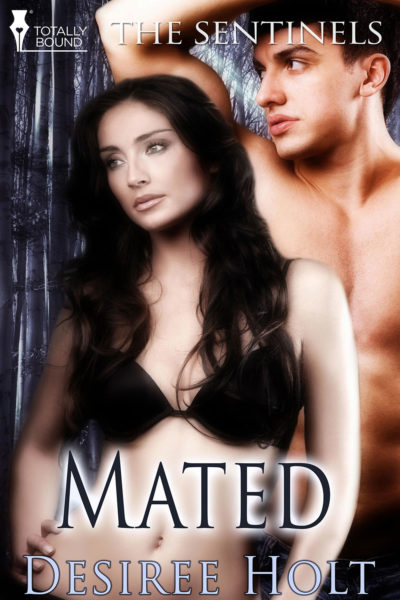 Cale Martin knew at once Linnea Porter was his mate, but could he convince her in the midst of turmoil?

When The Sentinels agreed to look into the disappearance of Linnea Porter’s sister, Cale Martin was tagged as the lead. He didn’t know what he expected the first night he showed up at Linnea’s, but a surge of lust wasn’t on his list. Nor did he expect his inner wolf to reach out to her.

For Linnea, fascinated by shapeshifters, Cale called to something primitive inside her. As they focused on finding her sister, the bond between them continued to grow. Was it possible that this shifter and this human were meant to be…mated?

Reader Advisory: This book is best read in sequence as part of a series, although it can be read as a standalone title.

“I want to thank all of you for showing up here for me.”

Regan Matthews Spencer stood at the head of the table in the conference room at The Sentinels. On either side of her were the eight Sentinels, including her husband, Brian, and the newest additions. Ann Marie Knight, Drew Noland’s wife. Sierra Hart, married to Brian’s brother, Luke. And Mack Renfield, recently wed to Sentinel Kelsey Bryant. Like the eight original members of the protection agency, Ann Marie and Mack were also shifters. This meant that when they were needed in their wolf form, the team had additional help.

Now Regan, an assistant prosecuting attorney who had met Brian when she herself hired The Sentinels, was asking their help with a very personal problem.

“No problem, Regan.” Drew Noland smiled at her. “We’re all here for each other.”

“Well, I know you and Ann Marie…” she looked around the table, “and you, Cale, drove in from your ranches because I asked for the full team, and I really appreciate it.”

Regan smiled, although it was a strained expression. “Well, thanks, anyway. This is very important to me. I may not need all of you but I wanted everyone’s input.”

“When did your friend disappear?” This from Cale Martin. Lean and dark, with thick black hair, he looked every bit the rancher he was. His ranch in the Hill Country was near Drew and Ann Marie’s and they’d driven in to the meeting caravan fashion.

“It’s actually my friend’s sister. Linnea Porter and I started in the prosecutor’s office together and we’ve always been very close. Some of you met her at our wedding.” She looked around the table again.

“Sorry,” he apologised. “My mistake. But if she’s that close to you then her sister’s disappearance has to have hit you hard, too.”

“Yes, it has. I met Cathy a number of times and I agree with Linnea. This isn’t someone who would just walk away from her friends and family without a word.”

Brian uncurled himself from his relaxed pose. “She’s been a great friend to Regan and me, so I’d really like it if we helped out with this. Linnea’s really distraught over her sister’s disappearance. Cathy Porter isn’t an irresponsible person, so you can bet something’s wrong here.”

“Especially since the police haven’t been able to find any trace of Cathy Porter in almost a month,” Regan added.

“Linnea’s at the end of her rope,” Brian told them. “Like Regan said, the investigation’s going nowhere and I think the cops are getting ready to stick it in the cold case files.”

“When was the last time someone saw her?” Mack Renfrew asked. When he and Kelsey Bryant had gotten married The Sentinels had added him to their group. Now he, Kelsey, and Luke and Sierra Spencer ran a northeast office of the agency in Maine where they all lived.

Regan took a deep breath and looked at her notes, although she knew the story by heart. “According to both Linnea and Cathy’s boyfriend, the last anyone saw her was when she left for work on a Thursday morning. She works for The Gage Foundation, one of the biggest philanthropic foundations in the city. She had some calls to make out of the office, checking on fund recipients. She was getting ready to do the monthly reports to donors and she had some questions she wanted answers to first. No biggie. She did that a lot.” She took a deep breath and let it out slowly. Talking about this always upset her. “Anyway, she never showed up at the office and no one’s seen her since then.”

“I’m sure the cops checked with everyone she saw that day,” Mack commented.

Regan nodded. “Yes. More than once. But it’s like she just disappeared into thin air.”