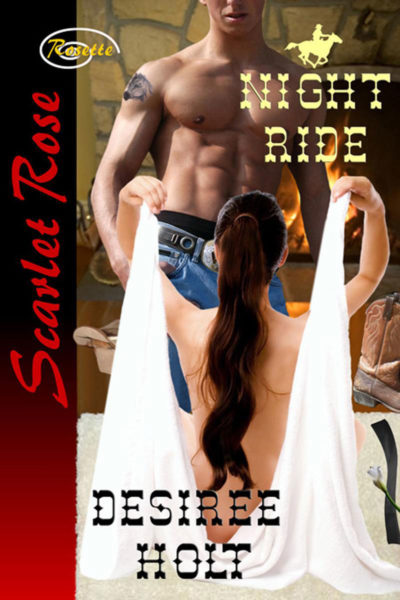 Could she accept an offer of forbidden pleasure from a total stranger when her heart belonged to another? Could she take a chance that this Night Ride might lead to everything she desires? Or would she be stepping into a danger greater than she’s ever known?

“A-all right. I’ll stay.” She wet her lips. “I’ll give you the trust you ask for. And believe you when you say you mean me no harm.”

“Good,” he said in that barely audible voice. “You won’t be sorry.”

His hand moved over her hips, across her abdomen, then crept beneath the thin material of the dress to touch her cunt. One long finger traced her slit and teased at the entrance to her wet sheath. She was embarrassed to realize she was already seeping juices, cream that trickled onto her thighs and coated his fingers.

“I knew you’d be responsive. I’ve dreamed about touching you, about sliding my fingers inside your pussy, about fucking you in more ways than you can imagine.”

His warm fingers slipped from her slick sheath, and strong hands pulled her against him. She clutched at his biceps, feeling the corded muscles bunch and flex beneath her fingers. His swollen cock pressed against her through the denim fabric restraining it, and he gave a soft groan.

When his mouth touched hers, the kiss was beyond her expectations, heady like fine, aged cognac that reeled the senses. He sipped from her as if he were drinking a rare nectar. His lips were warm and firm, his tongue a live wire probing the seam of her mouth and pressing its way inside.

One hand captured her head, slanting it to accommodate him as he nipped her lips, tasted her, drew out her tongue to duel with his. They were both breathless when at last he lifted his head. He held her tight against him, his arms hard and strong.

“I have to see you,” he whispered as he bunched the soft material of her dress and pulled it upwards. “All of you.”