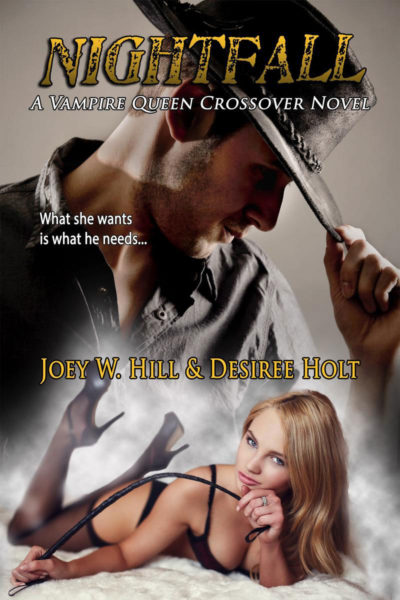 Ranch owner Quinn Pedraza has to find someone to run the saloon he won in a bet, but more than that, he needs a woman who can handle his alpha personality…and closet submissive sexual cravings. When vampire Selene Torres arrives on the scene, he gets everything he wants—and learns what he really needs.

Fucking shit. Drawing a breath, Quinn prepared to wade in and yank the two drunks apart by the front of their shirts. But then she beat him to it.

He was sure no one like her had ever walked into After Hours, or any other local bar or saloon he’d experienced. She couldn’t have been more than five feet tall, but the high heels of the fancy dress boots she wore beneath a pair of snug jeans gave her at least another four inches. Hair like spun gold fell in waves to her shoulders, shimmering as she moved. A thin blue short-sleeved top with a light spray of sparkles across a New Orleans bar logo hugged breasts that would be a nice handful, and Quinn had large hands. A silver pendant that looked like a tiny dagger through a heart pointed right down at the tempting hint of cleavage, a warning and invitation together.

When he pushed himself past the usual focal points to get to her face, he found features like blown glass, perfect and delicate. At first glance, he thought she wasn’t much older than the pair of twenty-one-year-old girls he’d hired for low wages to pour drinks. But a second look said this was a fully mature, sexy woman. Ethereal yet earthy. Her eyes matched the blue of her shirt, the smoky color of an early-dawn sky.

When she stepped between the two men without hesitation, he bit back an oath. He was ten paces away, too far to keep her from getting mashed like Spam between two slapped-together pieces of Merita.

Instead, one slim hand landed on the barrel chest of Howie Gold, a regular, the other on the arm of a drugstore cowboy who’d probably said something stupid to set off Howie. They both had clenched fists and alcohol-induced stupid written all over their faces, but then she leveled that blue gaze on them. “You’re interfering with my getting a drink. And that pisses me off.”

She didn’t raise her voice, but she didn’t need to do so. The impact of her expression turned them into deer frozen in the headlights, waiting for a truck to hit. Those blue eyes held something… Well, he knew how crazy it sounded, given he could have picked her up under one arm, but the word that came to mind was dangerous.

Mesmerizing was a close second, and he meant it literally. Something about her quieted the crowd and held both men in place, those fists loosening into uncertain curls.

In contrast, that sense of danger made Quinn want to keep coming toward her. His cock had hardened, pressing against the denim of his fly and demanding release. No, demanding to be plunged into the tight wetness of her body.

There was no way she could sense his reaction. A handful of occupied tables were between him and her, plus a bunch of people on their feet to corral the fight. He was just one in the crowd. Yet when his cock stiffened, her gaze flicked away from the two men and lasered right to him.

He had a voracious sexual appetite and liked a dozen different kinds of kink. All the women he’d chosen in the past fifteen years—and the rodeo circuit had provided a lot of those–had seemed to enjoy sex with him. He tried to be a generous lover and, without ego, he knew he had the kind of alpha male personality women liked, strong and demanding in the right ways. Their willing compliance should have been enough for him.

Yet sometimes, lying awake in the hours before dawn, a sleeping woman next to him, he wondered if they were too obedient. Too acquiescing. And damn it all, that didn’t make any sense. It wasn’t as if they just lay there and waited for him to give them orders. Most of those relationships had had some substance to them, such that a couple became more than just casual sex. Annie had been the last of those, some time ago.

Since then, he’d had the occasional casual fuck, but it was half-hearted. He’d told himself it was because of how hard he was working, but he knew that was a lie. Every relationship had lacked some intangible thing he couldn’t put his finger on.

Something which he had the oddest feeling had just put its finger on him.

In her eyes, he saw a deep, reciprocal interest. Deep as in dark and mysterious, a cavern that held unknown hazards. But almost as soon as he registered it, her attention went back to the two would-be combatants. “You can take this outside,” she said. “Beat the shit out of each other in the parking lot. I don’t care. It’s not happening in here. But whether you do that or you stay inside and behave, you’ll go give the bartender an extra twenty for the glasses you broke. That’s only fair, right?”

She wasn’t patronizing or sarcastic, which might set them off again. If anything, her no-nonsense tone reminded Quinn of the way his own mother used to handle problems between him and his brothers.  She had a quiet firmness that convinced them of two things—she loved them, and she would beat the hide off them without remorse when they deserved it. Even when they reached the ages that they towered over her, they respected her the same way. She also stood between them and their loud, domineering father, the only one he seemed to listen to.

This woman gave Howie’s chest a light tap, her fingers tightening on the drugstore cowboy’s arm. “I’m not in the habit of repeating myself, boys. Do we have an understanding?”

“Yes, ma’am,” Howie mumbled as the other man dragged his hat off his head.

“Good.” She gave them a tight smile, and glanced over her shoulder at Maria, the goggle-eyed waitress and bartender on shift tonight. “Charge my tab for one of those pizzas with all the fixings and bring half to each of them with a pitcher of ice water. That’ll soak up some of the alcohol interfering with their better judgment.”

Releasing them, she stepped back. With only a brief shift in expression, she made it clear they were dismissed to do her bidding. Quinn watched in amused disbelief as the stubborn cowhand and dumbass kid both moved to the bar, reaching for their wallets.

Then he had bigger concerns. As the crowd started to wander back to their tables and own conversations again, her gaze came right back to him. 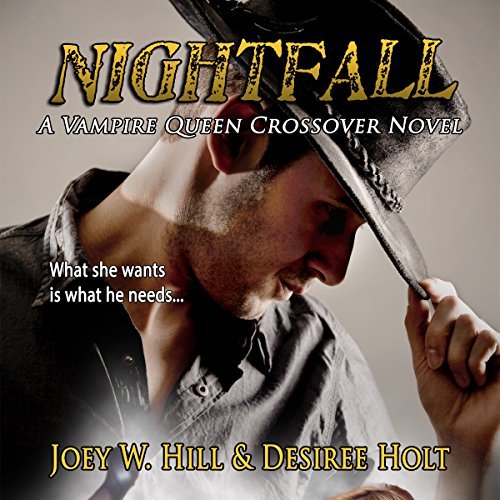