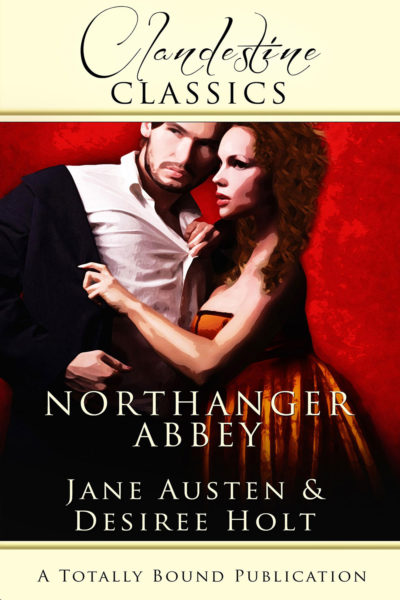 Devotees of Jane Austen or the Bronte sisters may wish to loosen their corsets and have the smelling salts within reach. Total-e-bound has taken some of the greatest works of English literature and given classics such as Pride and Prejudice, Jane Eyre and Wuthering Heights a bawdy makeover. I am pleased to be one of the five debut authors, checking behind the bedroom door on Catherine Morland and Henry Tilney in Northanger Abbey. The series has received world wide press coverage (just Google Clandestine Classics and see all the links that come up.

Want to know more about them? Go here: http://clandestineclassics.blogspot.co.uk/

When Catherine Morland meets John Thorpe and Henry Tilney in Bath, England, she is thrilled by the attention both men pay her. She soon realises what a social climber John is, but it is the very handsome Henry who lights the sparks inside her. When Henry’s father invites her to visit their country mansion, Northanger Abbey, she is delighted to have more time to spend with Henry.

As the days pass Henry introduces her to a whole new world of eroticism, a world beyond her imaginings. A world where sex knows no boundaries and even her deepest, most secret fantasies, can be played out behind closed doors.

This is the story of the initiation into life of the naïve but sweetly appealing heroine, Catherine Moreland. A woman who suddenly finds herself an enthusiastic participant in the darker side of sexual activities. At the same time she finds herself embroiled in a real drama of misapprehension, mistreatment, and mortification, until common sense, humour and a crucial clarification of Catherine’s financial status, resolve her problems and win her the approval of Henry’s formidable father.

You only pay for the words our authors have added — not for the original content.

Darkness impenetrable and immovable filled the room. A violent gust of wind, rising with sudden fury, added fresh horror to the moment. Catherine trembled from head to foot. In the pause which succeeded, a sound like receding footsteps and the closing of a distant door struck on her affrighted ear. Human nature could support no more. A cold sweat stood on her forehead, the manuscript fell from her hand, and groping her way to the bed, she jumped hastily in, and sought some suspension of agony by creeping far underneath the clothes. To close her eyes in sleep that night, she felt must be entirely out of the question. With a curiosity so justly awakened, and feelings in every way so agitated, repose must be absolutely impossible. The storm too abroad so dreadful! She had not been used to feel alarm from wind, but now every blast seemed fraught with awful intelligence. The manuscript so wonderfully found, so wonderfully accomplishing the morning’s prediction, how was it to be accounted for? What could it contain? To whom could it relate? By what means could it have been so long concealed? And how singularly strange that it should fall to her lot to discover it! Till she had made herself mistress of its contents, however, she could have neither repose nor comfort; and with the sun’s first rays she was determined to peruse it. But many were the tedious hours which must yet intervene. She shuddered, tossed about in her bed, and envied every quiet sleeper. The storm still raged, and various were the noises, more terrific even than the wind, which struck at intervals on her startled ear. The very curtains of her bed seemed at one moment in motion, and at another the lock of her door was agitated, as if by the attempt of somebody to enter. Hollow murmurs seemed to creep along the gallery, and more than once her blood was chilled by the sound of distant moans. She began to wish for Henry Tilney to find his way secretly to her room to help allay her nervousness.

When the door to her room opened slowly she searched frantically for something with which to defend herself, not knowing if it was ghost of human who trespassed. When she saw Henry slip into the room, fingers to his lips, she poofed out a sigh of relief. Had just thinking of him conjured him up?

“What are you doing here?” she whispered as softly as she could, noticing that he had divested himself of all his clothes save a thin pair of breeches and a loose shirt.

“I feared the storm would disturb you and wanted to ease you through it.”

“But—But—But what if someone sees you walking around like that?” Her fingers gripped the bedclothes.

“General Tilney and my mother are long fast asleep,” he whispered back, “and I hope the same for my sister. However, since she sleeps two doors down we must be careful not to do anything to call her attention.”

“And what would we be doing?” she asked.

With a smile Henry approached the bed and eased himself down on top of the covers next to her. “I hope many things,” he told her. “I have felt this strong attraction between us from the first moment of our meeting and I have seen in your eyes a like feeling. If I am mistaken please advise me of it and I will leave at once.”

Even as the blood stirred within her and her pulse rate accelerated, she felt compelled to offer at least a token protest. “I assure you that I am still an innocent, an unsullied and respectable female.”

His hand cupped her cheek, turning her face to his. “My dear sweet Catherine, I am fully aware of that. I would take no advantage of that if you bid me leave. And if you bid me so I will be gone and this will be as if it never happened. But understand that you have my full respect as well as a number of other emotions that far surpass it. From our first meeting I have dreamed of being the one man to show you the pleasures of the body. I care for you so much. Please do not turn me away.”

She could have demurred further but she was so eager for his touch that it seemed to her a waste of time so she simply smiled and placed her hand over his. “And I have dreamed of the same things.”

Henry leaned his head closer to her face and placed his lips on hers. They were firm and moist and the touch was utterly pleasant. He brushed his mouth lightly over hers in a back and forth motion, teasing her, until his tongue peeped out to trace the seam of her lips.

“Open your mouth for me, sweet Catherine,” he urged. “Let me in.”

She did so and when his tongue swept inside it filled her with a sensation of pleasure that danced through her body. Her nipples tingled and at once the sensitive muscles in her cunt trembled. She felt the liquid of her arousal soaking the crotch of her nighttime bloomers and had to press her thighs together. All this from a kiss! Imagine! But it was far beyond any kiss she’d ever imagined. Henry’s tongue touched the inside of her mouth everywhere, sliding over her own tongue in a movement that coaxed her to let hers dance with him. He thrust it in and out, mimicking the act of sex she and Virginia had read about and arousing her even more.

Pulling the gown up far enough, he proceeded to pull one nipple into his mouth. Catherine’s breath caught at her throat as he sucked deeply on it then gently scraped it with his teeth. He cradled her breast in his warm palm kneading it gently as he continued to suck and nip at the stiff peak. Her blood heated and the fire roared straight to her cunt to meet the insistent throbbing in her already wet tissues. He gave equal attention to her other breast until she was arching up to him in delight.

When Henry lifted his head she cried out. “Oh, continue, please, I pray you. I cannot bear it if you stop.”

His smile was mesmerising. “If I am to continue we must move all this fabric out of the way.” He plucked at her gown, rucked up around her neck, and ran a finger around the waist of her drawers. “I wish to see your body in its entirety that I may worship every inch of it.”

No one had seen Catherine naked since she was a child with the exception of her good friend, Virginia. But she trembled in anticipation of Henry’s gaze taking in every inch of her and hoped she would not be found wanting. Mutely she nodded and allowed him to assist her with the removal of her nightwear, shivering slightly as the cool night air wafted over her.

Henry placed a kiss between her breasts. “I am not shy of my own abilities to warm you up but I think a fire would help us along.”

Catherine lay nude with her arms crossed over her breasts, her eyes glued to Henry as he built up the fire until it leapt into a nice flame. But the fire was not the only thing that heated her as Mr Tilney began to slowly remove his own clothing, draping it over the arm of a boudoir chair. She was stunned at the sight of his magnificent body, gleaming in the firelight, the curled hair on his chest slightly darker than that on his head and darker still as it clustered around his cock which stood straight out in all its glory. Her fingers itched to touch it, to rub herself against it. To see if it would fit within her as the book had described.

Henry Tilney smiled at her as he stood beside the bed, what she could only describe as hunger flaring in his eyes.

She reached out her hand and closed her fingers around silky skin over a hard as steel core. “Oh! It feels hot!” Experimentally she slid her fingers up and down, from tip to root and back again. It flexed beneath her touch, a most pleasant feeling so she did it again and yet again. The soft wiry curls surrounding it brushed sensually against the edge of her hand and by the third slide a small drop of fluid eased from the tiny slit in the head. Catherine stared in wonder and before she could help herself touched the tip of one finger to it. Bringing her finger to her mouth she licked slowly, enjoying the slightly salty taste of it.

Tilney’s expression heated as he watched her. Do you fancy the taste, then?”