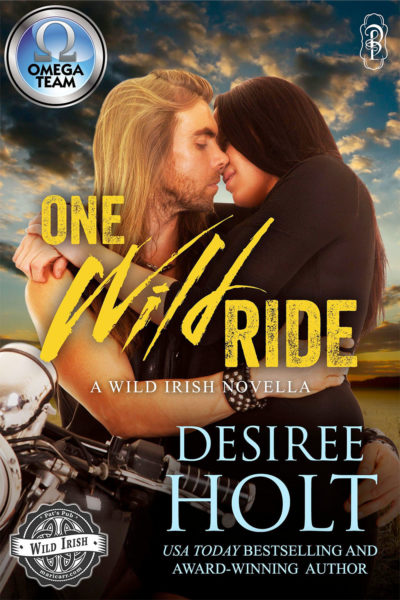 Mary McCoy wanted more than a break from her high pressure job. She wanted to find a hot motorcycle man like the one on the poster in her office. Part of her break from work was finding him. Little did she know that when she took a temp job as a bartender at Pat’s Irish Pub he’d walk in the door and take her breath away.

Marcus Tyree had left his soul on the war-torn battlefields of the Middle East. Still plagued by nightmares, he takes a job with his friend Grey Holden’s Omega Team agency, searching for drug dealers in the pub, a most unlikely place. And focused on the bartender, a most unlikely person.

The duo had just finished “Tennessee Whiskey” by Chris Stapleton when the bell over the door rang. Mary looked up as she handed two black and tans across the bar and nearly dropped the glasses. If she didn’t know better, she’d have thought the model from her motorcycle jackets poster had just walked through the door. Big was the first thing she thought. Then sexy. Then wow! Just wow! A very brief vision flashed in her brain of herself laid out on his motorcycle seat as he pounded into her whiles sucking her nipples.

She had wished for the poster to come to life, and here, in the flesh, was the image of the guy she lusted. She figured him for well over six feet, with streaky dark-blond hair just to his collar. His T-shirt and jeans were molded to a figure that screamed sculpted muscles, and his feet were shoved into worn biker boots. She knew two things right off the bat—she was seized by an insane desire to strip off all his clothes and run her hands over every inch of his body, and he’d never been here before. He looked around, obviously searching for a place to sit down.

“Mary, are you frozen in place like a statue, darlin’?” Tristan’s rich voice pierced her state of insanity.

“Oh.” She blinked. “Oh! Sorry, Tris. I was just, um, checking the crowd to make sure everyone’s taken care of.”

He laughed and shook his head. “Don’t try to kid a kidder. Just try not to drool in the customers’ glasses.”

She actually felt herself blush. She, Mary McCoy, high-powered public relations expert and temporary barmaid, wasn’t ever given to blushing.

“Not drooling,” she muttered, but she had to ask the waitress to repeat the order she’d just given her.

Ignoring Tris’s low laugh, she moved up and down the bar filling orders, pulling taps, mixing drinks, opening bottles, refilling the bowls of nuts. But all the time, she was acutely conscious of Mr. Motorcycle. He had managed to make his way to the end of the bar and squeeze into a standup spot. She raked her gaze over him head to toe, drinking in all those muscles again, and damn! Was that a bulge she saw at his fly? Was his package so big that even at rest it was there?

Somehow, she managed to yank her gaze upward again and smile at him.

“Welcome to Pat’s Irish Pub. What can I get for you?”

His voice was low and husky, his beautiful lips tilted up in a half smile. He had eyes the most incredible blue, ringed with lashes so thick it was a shame to waste them on a man. A square jaw and high cheekbones gave his face a raw masculine look, but those eyes and those lips told her there was a softer side to this man, too.

“I didn’t think that was such a difficult question.” She realized he was smiling at her. “Shall I ask it again?”