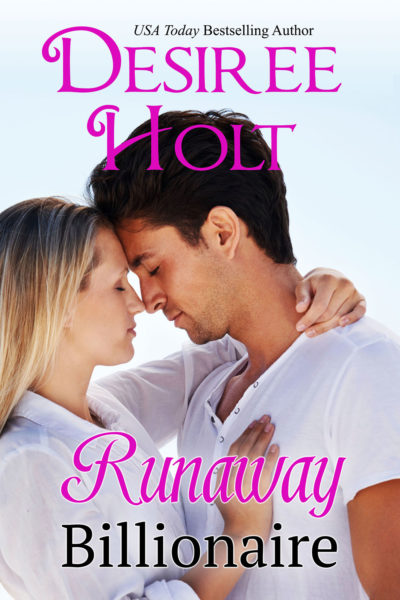 What happens when two sets of parents decide their thirty-something offspring need to get married? To each other. The problem? Neither one wants wedded bliss, and they don’t even know each other.

Kyle Montgomery is happy with his single state and the excitement of running the Montgomery Hotel Corporation. Pepper Thornton is just as happy running the family B&B, the Hibiscus Inn. When Kyle’s parents insist he take a look at the “darling” inn they found, he finally agrees. He’ll do anything to get away from their constant hounding. But he insists on going in without fanfare. He doesn’t want all the hoopla that usually surrounds his visits.

Pepper is so tired of her mother dragging every single man in Bayview to the B&B she invents a fiancé. Kyle Montgomery, single, on vacation according to his information. Lucky for her Kyle chooses that moment to arrive.

But Kyle is hardly prepared for the woman who launches herself at him with a hot kiss and introduces him as her intended. As long as he’s running away, he figures he might as well play along with her. She’s hot and fun and he can used the diversion. Pepper is just relieved he isn’t giving her away.

But someone forgot to tell them about hormones and passion and emotion. What started out as a fun ploy suddenly turns into something much more—until reality pokes up its head and nearly destroys it all.

Dot—at least he assumed that’s who it was—was efficiently waiting on the steady line at the cash register, so he wandered a little more. By the door, he spotted a rack holding tabloid-size newspapers and picked up a copy of The Bayview Banner. Great. He could imagine what kind of news he’d find in there. Still, he folded it and tucked it under his arm for later. He took his place in line for the cash register, smiling at the woman when it was his turn to pay.

“Fifty cents,” she told him.

Kyle dug into his pocket for change.

“This is quite a store you’ve got here,” he commented.

She grinned at him. “People tell me we’re a landmark here. You visiting or just driving through?”

Okay, so it was small enough here that strangers stood out.

“Actually, I thought I’d hang out for a few days. You know, get out of the rat race.” He hoped she didn’t ask him what rat race he meant. “I have a reservation at someplace called Hibiscus House.”

The woman’s lips stretched to a wide grin. “Oh lord, you will just love that place. And little Pepper is just the sweetest thing. She’ll take good care of you, I promise.”

Little Pepper? The sweetest thing? What the hell was he getting himself into? A finger of suspicion trolled its way up his spine. What had his parents gotten him into? He knew how devious they were, especially his mother, but this was just too much. He might be out of here by tomorrow. Sooner, if he felt trapped.

“Thanks. I’m sure I’ll be dropping in again.”

Back in his car, Kyle turned on the GPS on his phone again. Following the directions, he headed down the highway for another three miles before turning onto Hibiscus Lane—okay, this really was a movie. Magnolia trees and hibiscus bushes lined the narrow road which opened up into a large parking area and dead ended at a turn-of-the-century building complete with balconies and tall columns in the front. More hibiscus were planted around the building, and beyond it he could see the beach and Hibiscus Bay.

Getting out of his car, he took a moment to stretch his cramped muscles and inhale the crisp salt air touched with the scent of tropical flowers. The grounds were meticulously cared for, a point in favor of the owners. All the shrubbery was trimmed and the fences bordering the property a glistening white. He wanted to walk around and get a complete outside view of the place, but he figured he’d probably been spotted by now. Grabbing his suitcase, he climbed the three steps to the porch and opened the front door. Wind chimes immediately announced his entrance.

The lobby was clean and airy, the furniture upholstered in muted tropical colors. A graceful staircase curved up to the second story and in its curve was the registration desk. For a moment, he didn’t see anyone. Hmm. Didn’t they have those wind chimes to announce guests and visitors? Someone should be out at once, he would have thought.

But, in the next instant, a redheaded whirlwind spun out of the kitchen and launched itself at him. Legs wound around his waist, slender arms around his neck, and firm, nicely rounded breasts pressed into his chest. The scent of vanilla teased his nostrils and set his body on full alert. He was so startled, he was actually tongue-tied. What the hell was going on here? He’d never had a welcome like this before.

“Oh, Kyle,” the whirlwind squealed. Then she planted a kiss on him that scorched him to the soles of his feet. “I’m so glad you got here. I want to introduce you.” Still wrapped around him, she turned to the three people who had followed her into the room. “Here he is, everyone. My fiancé. Kyle Montgomery. Isn’t he gorgeous?”

Fiancé? What the hell? Had he fallen into an alternate universe?