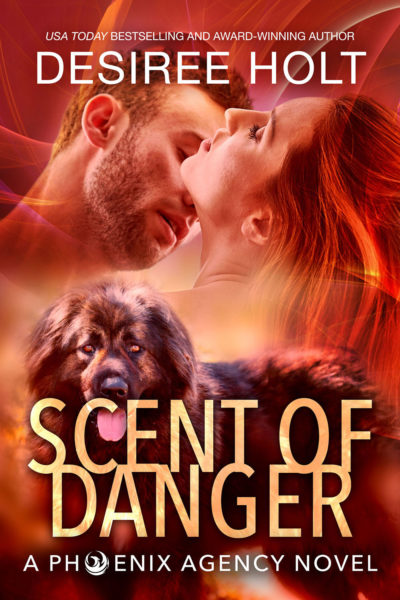 Kelly Monroe was shocked when her dog, Xena, a Caucasian Ovcharka seemed to bond at once with Rick Latrobe, a partner in the high profile Phoenix Agency. Ovcharkas are known for linking with only their owners. But Xena is picking up Rick’s wave length, very much aware when an attempt is made on Rick’s life and sensing all kinds of danger signals related to Rick’s current project: ferrying a shipment of arms to a private security cadre in Iraq. Rick is nearly killed when the shipment is stolen by terrorists who are hot on his trail. Only Kelly and Xena—coached by members of The Lotus Circle to expand the psychic link between the three of them—can keep him safe. As Rick scrambles to learn who’s behind the whole mess, the relationship he and Kelly have deepens. But Xena is the real star, not only signaling when danger is at hand but “sniffing” out the killers.

He’d been with many women in his life. Some might even say too many. But none of them had ever touched something deep inside him the way Kelly Monroe did. Or so quickly. Whatever was between them was like dry kindling that had burst into flame the moment they’d met.

Maybe it was the dog. Stranger things had happened, for sure. But whatever the reason, he wanted this woman with a fierce hunger, and not just for an occasional tumble in the sheets. He’d always believed the life he lived was bad for steady or permanent relationships, but Mark and Dan seemed to be making it work well for them.

He heard Kelly’s musical voice behind him, turned, and smiled. “I should apologize for flaking out in the middle of the day like that,” he told her.

“No apology necessary. Your body took a beating and needs to recharge. Would you like to take a shower before dinner?”

“Yes, but first I want to say something.” When he was standing in front of her, he cupped her chin and locked his gaze with hers. “I know this is fast, Kelly. If it’s too fast for you, then tell me. But I’m not taking what’s happening here as anything casual.”

A pale blush colored her cheeks, but she didn’t take her eyes from his. “And I could have told you to get on that helicopter and go home. I felt the same thing you did the other night. Life can be fragile. Why don’t you shower, and we’ll see where this goes.”

She even had an extra toothbrush and a razor in the bathroom cupboard and set them out with the towels. When he came back into the bedroom, towel knotted at his hip, he was only mildly surprised to see her sitting on the bed cross-legged.

“Were you afraid I’d pass out in the shower?”

She shook her head. “I was afraid I might change my mind if I waited until later.” She cocked her head. “How’s your body?”

He laughed. “As compared to what? I think it’s getting better.”

“Then why don’t you come over here, and we’ll see if we can improve it a little more.” She rolled off the bed and pulled the covers back, patting the mattress. “Make yourself comfortable.” She grinned. “And lose the towel.”

He’d been semihard after the shower, just thinking about her. Now they could have used his cock for a hammer. He tossed the towel aside and lay down on the cool sheets, watching her. She removed her clothes slowly, tempting him with each bit of herself she exposed. Full breasts with dark, rosy nipples already pebbled. He could see the pulse of anticipation at the delicate hollow of her throat.

He wanted to scream at her to hurry when she unzipped her jeans and slid them down her thighs as slowly as a stripper teasing a customer. Then she stood there, wearing only a rich purple thong, and every bit of blood in his body rushed to his groin. He reached out a hand to her.

“Come here, pretty girl. I have a present for you.”