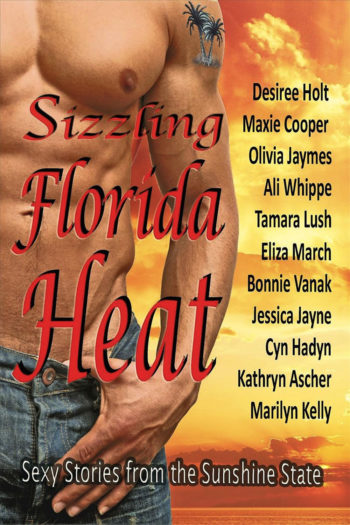 ALL TIED UP by Desiree Holt

Her trip to Florida gives Bree Donovan a chance to recover from her broken relationship with her sub. The last thing she expects to find is a Dom who pushes all her buttons. But can she find the courage to make the leap to a new relationship and a new role?

Sara followed Drake onto the platform and walked immediately to the stock and pillory setup, facing the audience. Without being told she settled her wrists into the indentations carved for them and stepped into the spaces for her ankles. Drake crouched down to lock her ankles into place then rose to do the same with her wrists. Now, positioned with her legs spread wide and her arms raised and bent, the angle the tiny Domme had been presented in, looked anything but easy to take. Still, she’d used the same apparatus on her subs before, and they seemed to revel in the discomfort it caused.

Standing to the side enough to give the audience a view of his handiwork, Drake pulled and tugged on the tips of Sara’s breasts, pinching them hard enough to draw a low moan of pain from her. Then he bent his head and took them in his mouth, one at a time, drawing his lips back so at least part of the audience could see he as he bit the sensitive buds. One hand lifted to cup Sara’s chin, holding her mouth closed and signaling her to remain silent.

Bemused at the woman’s reaction, Bree pondered her ability to give herself over to his commands, when she normally held that position. What kind of internal struggle had taken place to get her there? Or did the strength of her relationship allow her to do it? Again, Bree searched within herself, trying to find any relationships she’d had, even with Chad, where she would have been willing to do that.

As if sensing her mind had wandered, Rafe squeezed her shoulder and whispered in her ear. “Don’t miss any of the action here.”

“I’m not.” She focused on the platform.

From a table at the side that contained a number of items Drake selected a box that he opened. Walking around the platform he displayed its contents to the crowd, a pair of nipple rings studded with some kind of stones. Taking the first one, he pulled hard on one of Sara’s taut buds before threading a thin bar through spots that had obviously been pierced. Biting the tips again, he repeated the performance with the other one. Bree wondered if she wore them regularly and whose idea had it been to do the piercing—hers or Drake’s.

Embellishment in place, he selected another box from the stage, removed whatever it contained and knelt in front of her again. Carefully he spread the lips of her cunt and licked the length of her slit. She shuddered in reaction to his touch but stayed silent, although she’d closed her eyes. Bree knew the woman prepared herself to fall into subspace, that state of mind where nothing existed except sensation and pain, the ultimate sexual stimulation and reaction. A place where a sub felt comfortable giving absolute control to a Dom or Domme.

Drake lapped her pussy again and tugged her clit with his teeth. Then, obviously satisfied he’d prepared her, he attached a thin gold ring to the nub of flesh. Finally he rose and stood back so everyone could admire her decorations. He walked around her slowly, everyone’s eyes followed him as the cameras caught the activity. Without any warning he lifted a hand and brought it down on one cheek of her ass. The slap resounded in the room. He followed it with a second, a third and a fourth.

Bree caught her bottom lip between her teeth. She couldn’t believe how much it aroused her to see Sara facing front, completely restrained and exposed, and at the same time, be able to witness Drake administering a spanking. The audience leaned forward as one and murmured admiringly at the red marks on Sara’s ass.