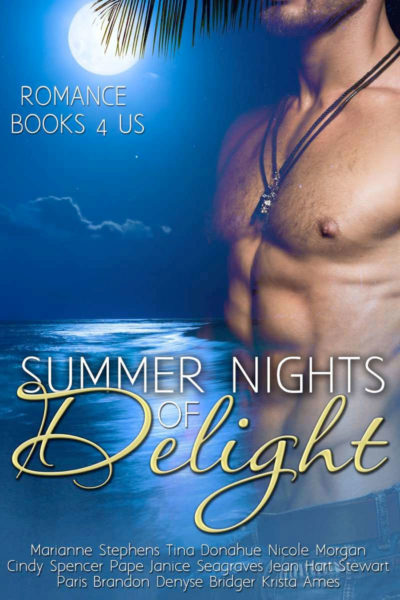 With the summer months slipping by, the temperature will still stay hot when you read this heart stopping collection of passion and seduction. Brought to you by the authors of Romance Books 4 Us, and written by today’s hottest bestselling authors, there is a little bit of something for everyone in each story. So run, don’t walk, to your nearest online eBook retailer and one-click this compilation of sexy reads which will pull you into… summer nights of delight.

Emerald Green by Desiree Holt
Dealing with the heartache of her fiancé’s infidelity, Meredith meets a handsome stranger who offers her a variety of temptations, leading to an afternoon initiation into the pleasures of the flesh. Just when Meredith thinks it will come to an end, life hands her another surprise which will open yet more doors to her own sexuality.

Dance For Me by Marianne Stephens
When fellow professor Nate catches Carla practicing her stripper routine for an amateur night contest, mutual attraction leads to a lusty affair. Her secret’s out…and she’ll soon discover his well-hidden one.

Make Me Breathless by Tina Donahue
Two rugged cowboys know what they want: the biker chick who just became their neighbor. Falling in love can sometimes happen for three, not just two…

Surrender Her Inhibitions by Nicole Morgan
J.T. experiences an unfamiliar ache when Sophia, the scared girl who ran out on him years earlier walks back into his life. Though time is not their side, Sophia is faced with the realization that her biggest fears and greatest temptations are one in the same. And only J.T. is the one that can get Sophia to surrender to her inhibitions.

Unawakened by Cindy Spencer Pape
Scotland in 1807 can be a lonely place, but Augusta MacLeish has four mischievous younger siblings for company—now if she only had money to feed them! When Colin Fordyce, the heir to an earldom and five wards in a remote Scottish castle travels to meet them, he finds the oldest Miss MacLeish is absolutely stunning. From a first kiss to a night of passion, the flames burning between them refuse to be doused.

Dragon Mirror by Janice Seagraves
Kidnapped and seduced, Crystal Wedgewood will do anything to get back to her husband. Even fight a king dragon with her bare hands.

The Third Warrior by Jean Hart Stewart
Once there were three friends united in battle as members of Wellington’s staff. Now two were married and joyful lovers instead of warriors. Can the third warrior, Charles Eaton, Viscount Milson, find that kind of envied happiness? Will the villain attacking Charles and Juliana destroy them or their chance for love? Or will they be able to fight against that evil so that Charles can become the lover he had always hoped to be?

Head Over Heels by Paris Brandon
A sexy CEO finds an unexpected treasure when a quirky thrift-shop owner falls off a ladder, and into his arms. Lust at first sight has never been so much fun!

Rebel Heart by Denyse Bridger
A sexy P.I. between jobs decides to take what should be an easy assignment. Little does he know his life is about to get complicated in a multitude of ways when he becomes involved with the woman he was sent to find–and reawakens a past nightmare neither of them is prepared for…

Surf’s Up by Krista Ames
Kylee Scott was running from a failed relationship. Having been given access to her Grams cottage and all the sun and solitude she could soak up, it was exactly what she needed. Her only distractions came in the form of two men, one on a silver surf board, and another in a bar. Even worse, she seemed to be falling for each of them.