The Sentinels — Part One 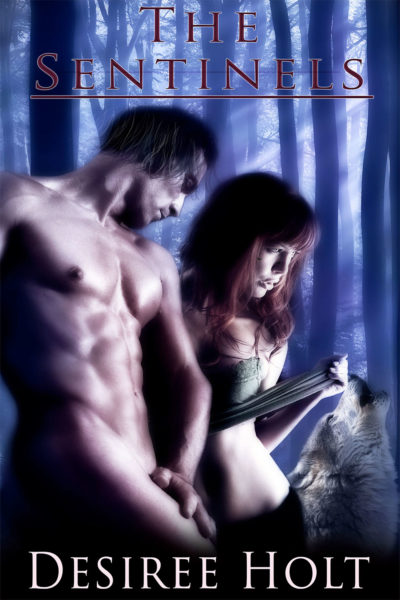 “Filled with spicy heat and enjoyable characters, you’ll definitely want to read The Edge of the Morning.”
—Two Lips Reviews

“Characters you want to scream at, cry for, hug, and smack take the reader on a ride that won’t soon be forgotten.”
—Night Owl Romance Reviews

Sierra Hart thought she had complete solitude at her grandfather’s cabin in Maine until she saw the wolf at the edge of the clearing – and her life turned upside down.

The cabin in Maine her grandfather left her is the perfect place for Sierra Hart to take a good long look at her future. She’s just quit her job and ended yet another relationship. Surrounded by five thousand acres of pristine forest, the place gives her the solitude she need. The only other sign of life is a gorgeous silver wolf hanging out at the edge of the clearing.

She was being stalked, her only protection a shifter, who heated her passion beyond anything she’d ever known.

As The Sentinels close in on the stalker, Regan wonders if she could love a man who was half wolf, no matter how hot or safe he made her feel.

When Kelsey Bryant retreated to the Maine woods to take a long look at her life, she wasn’t prepared for the dark stranger she met or for his hidden secret.

Feeling an emotional letdown after the marriage of two of her partners in The Sentinels, shapeshifter Kelsey Bryant borrowed the Maine cabin of one of her partners and retreated to isolation to take a good look at her life.

What will happen then?

There were eight of them, all that was left of a once powerful pack of wolf shape shifters, who roamed northern Michigan freely and protected their land. But poachers and trophy hunters have all but erased them and they’ve been forced to relocate. Now they have banded together to provide protection for others who cannot protect themselves. From Maine to Texas, in wolf form and human, the use their special abilities for those who need them as they continue to search for others like themselves.

The sun had already been up for an hour, but its heat hadn’t yet warmed the air. The crisp chill of the night still lingered. Next to twilight this was Sierra Hart’s favourite time of the day. She’d carried her mug of coffee out to the deck that ran along one side of the cabin and stretched out on the comfortable lounge chair. She’d found an old riding mower in the shed behind the cabin. Surprised that it still worked, she’d mowed down the wild growth immediately surrounding the building to give herself a small clearing. Beyond that, the Maine woods stretched forever.

What a shock it had been to learn her grandfather had left this to her—his cabin where he’d hunted as a young man and where he’d retreated after her grandmother died. The deed, which both the attorney and the county records verified, also included five thousand acres of forest and a small stream. It came to her at a time when she was at a crossroad in her life, relationship-wise and career-wise. Without a soul around for miles, she had plenty of space to do all the thinking she needed to.

She was idly scanning the trees at the edge of the clearing when she saw him—a huge silver wolf. Her first instinct was to barricade herself inside, but he made no effort to move closer to her, just stood there, watching her. A tiny breeze wafted from the forest across the deck, bringing with it an unusual sense of calm. She couldn’t have said why but instinctively she knew the wolf meant her no harm

She’d read about the organisations working to repopulate the wolf in northern Maine. An abundance of coyotes had demanded the presence of their natural enemy. But Sierra had never heard of a wolf coming this close to people without attacking. She watched him steadily, waiting for him to make a move, but he was as still as a statue. In fact, for a moment she actually thought he might be one, something she hadn’t noticed, until he lifted his snout and sniffed the breeze.

She sat up in her chair, prepared to bolt into the house if he made a run for her, but he held his position.

Her concentration was disrupted by the sound of tires on the so-called dirt road leading to the cabin. She wasn’t expecting any visitors so the sound of leaves crunching startled her. Who on earth would be coming here? No one except her closest friend, Nina, even knew where she was. Setting her mug on the little table next to her, she rose to her feet and walked to the end of the deck.

A black Montero Sport with tinted windows inched its way towards the cabin, finally stopping in the small gravel parking area. She waited, wondering if she should have a gun with her. Grandpa had been meticulous about teaching her with both rifle and handgun, and his entire collection was in the cabinet in the great room. Another bonus.

After a moment, both the driver and passenger doors opened and two men emerged. They could have been twins, dressed in black slacks and dark green polo shirts with a small logo over the breast pocket. One blond, one dark-haired, they sported short hair cuts, no facial hair and expressionless faces. Spotting her standing there, they walked towards her with steady strides.

Sierra leaned on the rail, bending forward. “Can I help you? This is private property.” Neither of them said a word until they were a foot away from her. Then the blond reached into his pants pocket, extracted a leather card case and pulled out a business card.

“Craig Danforth. Hagen Lumber Mills.” When Sierra didn’t reach for it, he set the card on the deck railing. “We’d like to talk to you about your land.”

She shoved her hands into her jeans pockets. “The same kind of talk you had with my grandfather? He wasn’t interested in selling and neither am I.”

“Miss Hart,” the other man began.

“Forget it. Save your breath.”

The other man stepped forward. “I don’t think you want to be hasty here. This is prime lumber property. Hagen is prepared to make you a substantial offer.”

The two men exchanged a look, then both nodded once and trudged back to their SUV. Sierra stood there, tense, until they drove away. When she turned to pick up her coffee mug, she noticed the wolf still standing there, only now his lips were drawn back in a snarl. She shivered then stepped back into the great room. Before she even poured another cup of coffee, she unlocked the gun cabinet, took out a rifle and a small 9mm handgun and loaded them. Next time she’d be prepared.