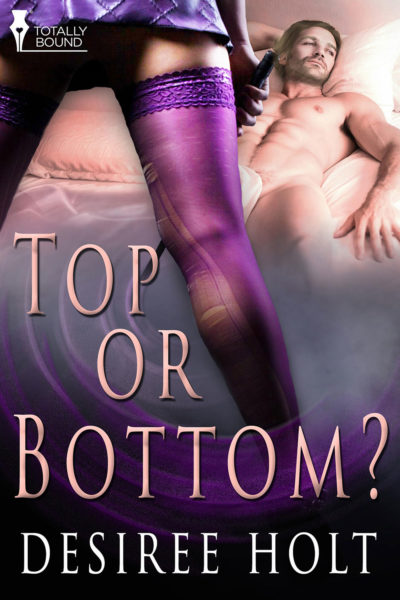 But when their playtime was over, would they be fulfilled? And could they go back to their normal roles or would they still crave something more?

Reader Advisory: This story has been previously released as part of the SWITCH anthology by Totally Bound

Keith Richmond glanced sideways at the displays on the far wall of the store. Yup, she was still there. Little more than a pixie, her height boosted by sexy stiletto heels. Her short coat, which barely brushed the tops of her thighs, was belted tightly at the waist. He wondered if she was wearing anything beneath it.

When she reached a small hand up to pluck a short switch from its hook, his groin tightened and his cock tried to push its way through the fabric of his pants.

But she drew him, nonetheless, the magnetic field almost visible. His sub was away for a week. The house felt empty without her and he was seized with a grinding need to satisfy his desires. He’d ditched work for the afternoon, thinking a trip to their favourite adult store to buy her some surprises might help. Besides, he knew they were at some kind of crossroads’both of them were questioning their individual roles. He’d thought about this for weeks, talking himself out of it, then into it again.

He’d seen sex from one side for so long that he wasn’t sure if he was capable of being a good Dom anymore. Was he still in tune with his submissive? Had habit taken over their relationship? Was he still as completely intuitive as he’d always been? The quality of a good power exchange depended completely on the Dom and the sub understanding each other’s needs, both physically and emotionally. Lately, he’d been questioning his ability to give as well as take.

He’d walked in and there was the pixie, almost as if she’d been waiting for him.

He gave himself a mental shake. He hadn’t come to the adult merchandise store to while away the afternoon lost in thought. He’d come here for a reason. And maybe that reason was the tempting piece standing across the store from him. She had ‘submissive’ written all over her. It was in her posture, her gestures. Definitely in her eyes. And certainly, the thin choker gracing her neck was an unmistakeable sign of ownership.

He watched the way her slender fingers brushed over the length of the switch, which was actually a length of birch wrapped in clear, damp cloth. He knew this store well, knew it took a fresh delivery every day. Birch and hickory were the most flexible woods to use for switches. For optimum effect, the birch should be fresh, peeled before the sub, all twigs and detritus efficiently removed. Keith liked to have his sub run her fingers over the freshly denuded wood before he brushed it across the entire length of her body, giving her a light taste of the feel of it before he applied it to her delicate skin.

Was the pixie thinking of her Dom while she caressed the length of wood? How it had felt in the past when he’d wielded it on her body? The sharp raps with it, the stinging pain cutting into her pleasurably, a pause between each so that the pain ebbed just a little until the next bite into her flesh? Liquid trickling from her cunt as her arousal grew in strength? Or did she prefer him to split the tip of the rod into many thin strips and apply it rapidly, raising streaks on her body from shoulders to thighs?