Trouble at the Treble T 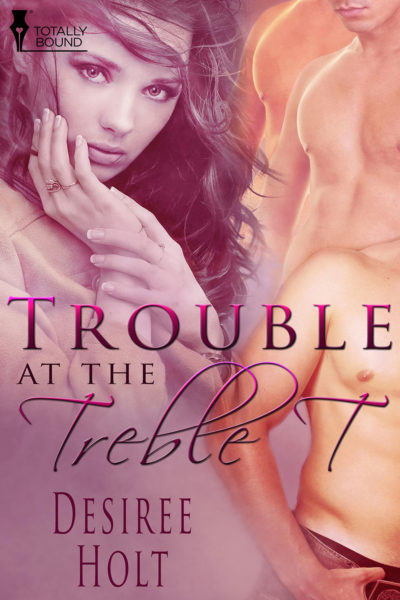 If one man is great, how hot will it be with three?

When Marti Jensen took the job managing the Treble Shooters honky-tonk, little did she know that the three Thompson brothers-Justin, Mark and Cade-had more in mind than having her pour drinks and keep order among the rowdies. 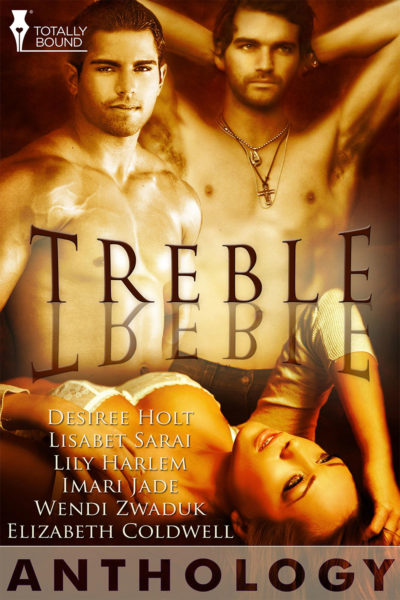 The jukebox had been playing nonstop in the honky-tonk since five o’clock, nothing unusual for a Friday night. People got off work for the weekend, ranch hands started filtering in, the beer began flowing and soon the postage-stamp-sized dance floor was filled with bodies gyrating to old and new country tunes.

Cade Thompson sat with his brothers, Justin and Mark, at a table in the corner of Treble Shooters watching people move to the music—faces flushed, hips wriggling, practically having sex with their clothes on while Travis Tritt and Lady Antebellum echoed off the wooden walls of the honky tonk. They’d spent a hard week with the hands moving cattle from one pasture to the other and culling those for branding. Tonight they’d decided to give themselves a break from the ranch and hang out at the bar they’d bought when the previous owner died. Spring Valley was small enough as it was, with few entertainment options. They didn’t want to see the only real place their hands could hang out close down.

Getting a full-time manager on a permanent basis, though, had been harder than they’d expected. Apparently the list of people who wanted to relocate to Spring Valley was a short one. The men had been burning both ends of the candle—running the Treble T ranch during the day and taking turns running the bar at night-when fortune had finally smiled on them.

Now Cade looked over at the bar, watching as Marti Jensen poured three drinks at once without breaking a sweat, and gave silent thanks once more for the day she’d walked in. He admired the way she kept her cool with all the chaos around her—the raised voices, the clicking of pool balls, the heavy thump of a bass and the squeal of the slide guitar, the lone waitress fighting for her attention along with everyone crowded at the bar demanding their drink now.

She was tall, maybe five-ten.

Just right for three brothers who all top six-four.

Stop! What are you thinking?

But he couldn’t take his eyes away from her lush body. The way the Treble Shooters T-shirt fell softly against her ripe breasts and the jeans clung lovingly to the finest ass he’d seen in a long time. The way her riot of curly black hair cascaded down her back and framed a face with high cheekbones, violet cat’s eyes and full, sensual lips. He’d wanted to fuck her since the day she’d walked in with the San Antonio classified rolled up in her hand and said in her saucy tone of voice, “Someone in here looking for a manager?” And ever since, he’d done his best to try and push the thought out of his mind.